Matt Maher at the University of Saint Francis Fort Wayne 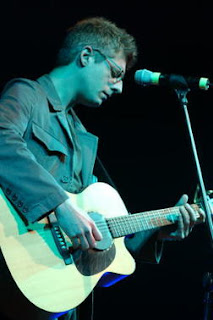 So, yesterday was bag pipes, reggae and Mexican hip hop. Today is Matt Maher. That is quite the cornucopia of music!

Matt Maher is one of the most famous and popular Catholic musicians around. He travels the world performing, with his group and with others. In Toronto, during World Youth 2002 he sang for the pope. Even more impressive, his song, “Litany of the Saints” served as the official Papal Evening Prayer. Matt was joined in singing by a crowd of 700,000.

He has been performing around the world ever since. However, he works at keeping perspective, of not becoming a celebrity. That includes missing awards and recognition when the events clash with his parish responsibilities. I cannot imagine that but then I suspect he is a lot more consistent in his faith than I am.

So how did he end up at the University of Saint Francis? Two of our students, peer ministers, heard him in concert last year. They then went up to him and asked if he would consider playing at USF and he said “yes!” They then contacted Jan Patterson, the Director of Campus Ministry, who has worked at arranging the concert.

The concert was well-attended. Besides students, faculty, and staff, the sisters came down from the mother house. Students from high schools and parish schools joined us. It was covered by Christian radio stations, Protestant and Catholic.

With the first song it was clear the concert was a success. Students began clapping, singing and dancing. It was also clear that this was not a rock concert but a worship service with rock music.


Matt Maher at USF: "Your Grace is Enough"

With each new song the students became more involved and participatory. The energy was powerful. High schoolers, college students and older adults were rocking and praising. In between songs Matt talked about his faith in a way that was celebratory and full of thanksgiving. He was not preachy, just passionate.

The sisters came down from the mother house. They got into the spirit of the concert. I tried to video them but the lighting was too dark. I have only the briefest of clips, dark and not in focus. However, it captures their enthusiasm and joy. Matt described the sisters in the back row as “beautiful” and he was right.


Matt Maher at USF and Everybody Jumps!

Finally, after the concert Matt and the band spent time with the audience. Matt then graciously agreed to be interviewed. He spoke of his musical gifts, his faith and the influence of Saint Francis in his life. It was a great night and I look forward to Matt visiting our campus in the future.


Matt Maher at USF Talking About Music, Faith and Francis

So, that was my weekend. It was so stimulating, so full of surprises and joy. I know small cities can be boring, lucky for me, I live in Fort Wayne!
Posted by Unknown at 5:45 PM