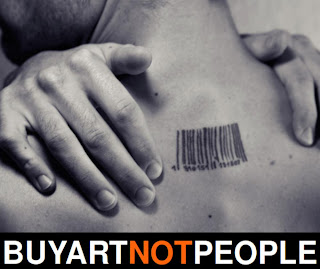 Nik Burkhart is one of two artists living in the Kaio community. This is his second year at Kaio. Nik takes his art very seriously. His abstract paintings may be found throughout our apartment and the Ministry Center. I am beginning to have an appreciation for abstract art that I simply did not have prior to my sabbatical.

Nik is not simply interested in his own art. He regularly attends the opening of art shows, he visits galleries and he reads about current events in the art world. Nik is increasingly involved in the larger Chicago art world. He is also passionate about helping people who are being sexually exploited. So it should not come as a surprise that he was one of the central organizers for a local Chicago happening known as “Buy Art Not People.”


Buy Art Not People set up

Nik and former Kaio member Josh McFarland were two of six organizers of an event focused on increasing public awareness about human trafficking. Along with 20 other artists their goal was to have an art show that highlighted the need for action related to human trafficking, They also wanted to make money that would be used to not only increase public awareness of the issue but also to help those who needed help. Well, Nik did a great job.

Nik worked on this project for a long period of time. It required working with sponsors, folks to lend out the space, coordinating artists, and film recorders. It required a focus on increasing public awareness of the event. The event required procuring food, a band and a movie about human trafficking. This was not the art world’s equivalent of a lemonade stand, this was an impressive event to help people who were hurting. I have to be honest, I had doubts about how well BANP would turn out. I am so glad I was so wrong!

I was not able to attend the event. I did however visit the site and interview Nik the night before the show. The space was huge, the art impressive. However, I thought there was too much space and too many chairs. I though it would dwarf the small turnout. In fact over 150 people showed up. They had to get more chairs. Each event was popluar. The auction made money. Nik is not just a dedicated artist. He is man who can turn ideas into action, who can see a need and find a solution. I am proud to have lived with Nik in Kaio for the last four months. I look forward to seeing where his journey takes him.

Buy Art Not People from thePROP on Vimeo.

Buy Art Not People by Marianne Bach on Viemo
Posted by Unknown at 1:11 PM