A Day in Chicago

I am on my way to the global conference sponsored by the International Christian Alliance on Prostitution. It is in Green Lake Wisconsin. Doug, the outreach director at Emmaus Ministries and I will be presenting at the conference. So, in order to meet up with Doug I got to spend a day with Kaio!

Whitney Merrell and I went to Pilsen neighborhood and to Little Village. Whit had lived two years in Mexico and so I wanted to share these two vary Mexican neighborhoods with her. 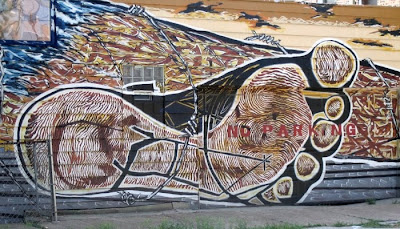 In Pilsen we just enjoyed looking at the enormous murals with the Sears Tower in the background. There were magnificent churches everywhere. Pilsen is a Mexican neighborhood that is also has a large number of art glories. So it is kind of a middle class, yuppie, ethnic-neighborhood. In that way it reminds me of Ukrainian Village. 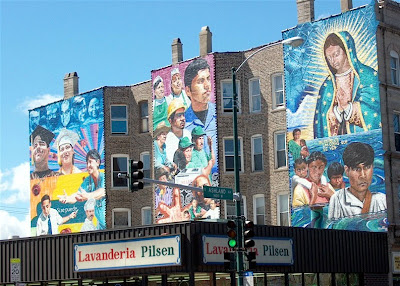 Whit and I visited the National Mexican Museum of Art. It was great. There were three special exhibits. These included “INTERMISSION” by Benito Huerta, “La Nacion Huichol: from the sea to the desert” which focused on the indigenous art prior to the formation of Mexico. I enjoyed listening to indigenous music from Mexico collected by a Norwegian anthropologist with Whit, my Hoosier-Kaio friend who lived in Mexico giving commentary. Now that is an integrative experience! The last exhibit was “Claroy Obscuro: Recent Paintings by Elsa Munoz”. Whit and I loved the museum and found ourselves spending a great deal of time in the permanent exhibits. 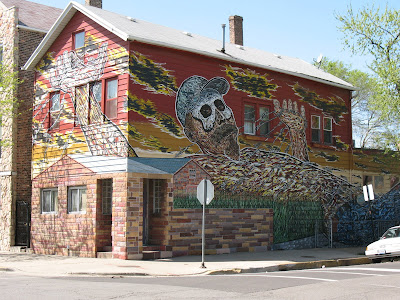 After the museum we drove down 26th street to Little Village. It was a strange drive because three blocks from Little Village is the Cook County Jail with its security walls, barb wire and guard towers. Still, the village was great. You enter under a large banner. The neighborhood is full of street vendors, live poultry shops, restaurants, shops and groceries. We had a great lunch. We then walked the streets. We stopped and enjoyed an outdoor mariachi band, we looked at vendors selling cotton candy, drinks and candies. Whit showed me how they sell jeans in Mexico (they have the mannequins face the opposite direction of the customers so you can see how good the pants make your butt look.) As soon as Whit explained this to me I saw the mannequins in a store front window, butts forward!


Whit and I then went out for coffee. Afterward we picked up Joshua Kent and just hung out for a few hours. Josh and I got to talk about all things Franciscan. It was good to be with the two of them again. 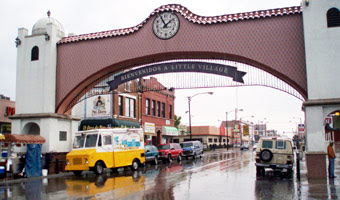 That evening I walked across the street to the Friendly Towers of Jesus People USA (JPUSA). They had sponsored a one day conference on Intentional Faith Communities. Now they were having a concert and I was going to attend. What a concert! Crossings played. Now JPUSA is home to so many arts and music is one part of that tapestry. JPUSA has bands from around the world play there but they also have their own blues and jazz bands, alternative and then their oldest, Crossings. Crossings is a Celtic band. However tonight they were very eclectic. They had African drums, Celtic hand drums. Bag pipes, tin whistles, fiddles, cello, guitar and mandolins. Tattooed and rainbow haired folks danced around the room. Patched up jeans, muslin blouses, and handmade jewelry made you know you were in a special place. It was a concert of hand clapping and foot stomping. I was happy I stopped by.

So that was my one day stop in Chicago. It was great. Now, on to the conference!
Posted by Unknown at 4:11 AM