Terrorism, India and a Small World 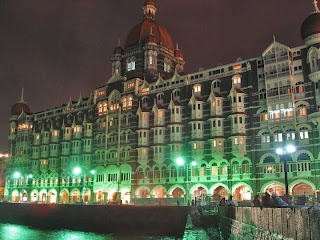 For months now we have been talking about Hindu extremists attacking Indian Christians. However, I hope we have been clear that extremists reflect extreme responses and not any one faith. While we deplore the killing of Christians in India we quite simply deplore the killing of any Indians in India. Tonight brings news of more tragedy in the subcontinent.

At this time at least 80 people have been killed and 250 were taken hostage by terrorists in Mumbai. This appears to be a well-planned maneuver. Five star hotels have been attacked including the Taj Mahal Hotel.

Mumbai is the financial center of this nation. It is a favorite destination of tourists. What is not clear at this time is whether Westerners were the real target. What is clear is that this is a small planet. We are all potential victims of terror. India has been in discussions with Pakistan to coordinate responses to terrorism. India is a major player in the response to pirates. Americans are increasingly realizing the importance of India in world affairs. It is easy to be drawn to India for its many cultures, music, foods, Bollywood movies, architecture, spirituality and history. Tonight however we are united with the people of India by our common experience with terrorism. While our governments will be sharing intelligence let the people of India know that we join with them in pray and meditation.
Posted by Unknown at 7:36 PM