A Pilgrim in Assisi: Kathleen Lotter

Kathleen Lotter is an administrative assistant in the School of Professional Studies at the University of Saint Francis. She has completed the Living Stones formation program and is a Protestant Franciscan through and through. This is the first part of her article on her pilgrimage to Assisi and Rome this past year. Enjoy. 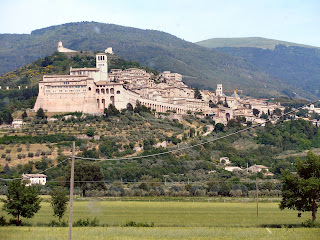 Once the excitement over being accepted dimmed, I had to settle down and concentrate on getting through spring semester, honors convocation and graduation. Once graduation was done, it hit me that – I’m going to Italy in two weeks! The two weeks flew by.

On May 22, 2008 my journey began with a van ride to Chicago with my fellow pilgrims. In my group were Maureen McCon, Barb O’Connor, Nancy & Bob Gillespie, Marilyn & Howard Fisher, Janice Pekrul, and Karen Palumbo. Once we arrived at the international terminal in Chicago, we were joined by three fellow pilgrims from Lacrosse, Wisconsin.

The flight over was uneventful. We had a choir group from Iowa that was heading to Assisi to perform in a music festival at the Basilica of Saint Francis. (Unfortunately, we didn’t have time to go see them perform.) I believe they were almost as excited as I was. You see, I have never been out of the country before so I was going way out of my comfort zone on this adventure. I just thought it was very cool that I was having breakfast at 37,000 feet over Barcelona, Spain!

We arrived in Rome on a drizzling Friday morning. After waiting in line at Customs and Baggage Claim, we wound our way out of the terminal to find Father Tod and Jean-Francois waiting for us. Father Tod told us before we left the terminal that when he says “go”, we go! The traffic waits for no pilgrim!! We finally found our bus after a couple of miscues and we were on our way to Assisi.

Some pilgrims napped on the three hour bus trip and others chatted with Father Tod and enjoyed the scenery. I did a little of both. I was doing my best not to cry because I was already home sick and exhausted. So I gave myself a pep talk and basically said to suck it up because you can’t turn around and go home!

We arrived in Assisi and my first view is of the Basilica of Saint Francis at the top of the hill. WOW!! The bus driver had to park the bus because the streets are too narrow for large vehicles to maneuver around. So we all welcomed the opportunity to walk after sitting for so long! It was like we stepped back in time! Cobblestone streets, outside cafes, the piazza and the Temple Minerva, San Rufino, Basilica of Saint Clare were just a few of the sites we saw on our walk to Casa Papa’s.

Casa Papa’s is the place where all pilgrims stay when on pilgrimage to Assisi. The staff took very good care of us and fed us extremely well. No complaints here about the food!! The rooms were simple and plain, but we weren’t there to spend time in our rooms – we came to walk in the steps of Francis and Clare. The rooftop garden was the place to hang out after a long day of walking and exploring. We had our question of the day discussions into the wee hours on the rooftop and shared a good many laughs too!

I think my favorite place in Assisi was Saint Mary of the Angels. I saw the Portziuncola for the first time! I had heard Sr. Anita Holzmer speak of this place so often that I was eager to see it. Once there, it took my breath away and brought tears to my eyes. You could feel the presence of God there. Unfortunately, we couldn’t sit inside the “little church” because the pews were all full, but that was okay. We were able to walk though it and was able to touch the stones that Frances did. Jean-Francois also showed us the garden where Francis threw himself into the rose bushes. The rose bushes still thrive today, minus the thorns.

Assisi was such a wonderful place. After a few days, we felt at home and comfortable. We hated to see our time in Assisi end, but we still had to spend a few days in Rome before we headed home.