A Pilgrim in Rome: Kathleen Lotter 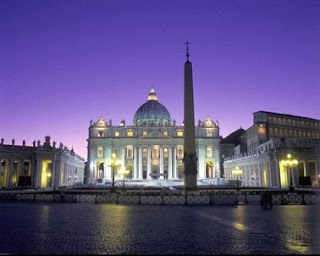 Kathleen Lotter is an administrative assistant in the School of Professional Studies at the University of Saint Francis. She has completed the Living Stones formation program and is a Protestant Franciscan through and through. This is the 2nd part of her article on her pilgrimage to Assisi and Rome this past year. Enjoy.

Assisi was such a wonderful place. After a few days, we felt at home and comfortable. We hated to see our time in Assisi end, but we still had to spend a few days in Rome before we headed home.

The three hour bus trip to Rome was uneventful and long. We arrived late on Thursday afternoon. After we got settled into our rooms, we met in the lobby and walked to St. Peter’s Square. Father Tod gave us a history lesson while the rain clouds swirled over us. After his presentation, I felt like I needed to go take a refresher course on world history! Never in all my years did I imagine myself
standing in St. Peters Square, a place that I’ve seen on television several times!

Our first very full day in Rome took us to the St. Peter’s Basilica. What a beautiful, awesome place! The high alter was amazing and all the artwork was truly incredible. We celebrated Eucharist in the Lithuanian Chapel. All around us we could hear various pilgrims celebrating the Eucharist. We also visited St. John Lateran, where I got to touch a 2,000 year old door that used to be in the Roman Senate! San Francesco a Ripa completed our very full day.

Saturday in Rome was ours to do some sightseeing. I visited the Sistine Chapel, which was truly awesome! Once inside the museum, you had to walk quite a bit to get there, but it was so worth it! After spending some time in the Chapel, I took a tour bus around Rome and saw the sites – the Coliseum, Circus Maximus, and Trevi Fountain.I wanted to go to the Spanish Steps but decided against walking there by myself.

I spent my last Sunday in Rome with Jan Patterson, USF’s Campus Ministry director. We waited in St. Peter’s Square until noon when the Pope came out and celebrated the Angelus with the crowd. He addressed all the pilgrims in each of the native languages represented: English, Spanish, Polish, Germany, and Italian. What a feeling to be standing there and hearing the Pope! WOW.

Afterwards, Jan and I walked up 300+ steps to the roof of St. Peter’s Basilica. What a site! We were going to go all the way to the top of the dome but ran out of time. That would have been an additional 200+ steps!

The group rode the bus to St. Paul’s Outside the Wall and got to see a large group of pilgrims from Turin celebrate Mass. What a site. So many people and each group were wearing a different color scarf! Father Tod was a bit disappointed that we didn’t have the place to ourselves, but we certainly didn’t mind.

We all were sorry our pilgrimage was ending but all agreed that we were ready to go home and share all that we had learned.

Assisi and Rome are truly awesome places and if you ever have an opportunity to go, whether with a group or on your own – GO!