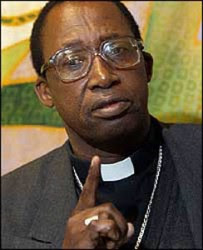 It has been awhile since I have commented about Africa. Not because it is not important or newsworthy, nothing could be further from the truth. I simply have not been blogging because I have been doing homework.

Catholic Bishops in Southern Africa have called upon the nations of the region to stop supporting Mugabe. The bishops were clear, support for the current leader would make the nations responsible for participating in “passive genocide.” The current government of Zimbabwe has ignored election results, abused the citizenry and led the nation into the worse economic crisis in the world. That is not to even mention the growing rate of starvation and disease.

The bishops called upon Mugabe to step down immediately. They also demanded all outside support for his government halt immediately. The sense of urgency simple reflect the dire straights the nation is in.

The European Union is blacklisting companies that support the regime. Secretary of State Clinton is reviewing what options the United States has to assist the people of Zimbabwe.

The bishops have acted with courage. Their position places them in personal danger and yet they acted. Now it is our turn to act.The Church needs to know we support them. We can do this in prayer, in financially and politically supporting the Church in Zimbabwee and in writing our government officials asking them to support the people of Zimbabwe. The need is great and urgent, our brothers and sisters need us.