Chicago and My Franciscan Formation 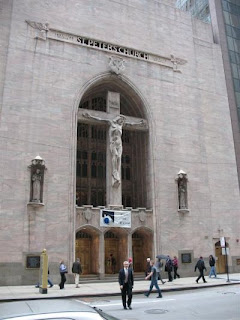 I am a Secular Franciscan and while on sabbatical I have not had an opportunity to spend time with my home fraternity. The challenge has been to find occasion to interact with other Franciscans. Well, that has not been a problem.

On Mondays I teach at the Adler School of Professional Psychology. Since the class begins at 9:30 I do not have time for morning Mass. This is not a problem because I simply attend Mass at St. Peter’s in the Loop. This is the center for Franciscan life in Chicago. The church is big and impressive. The huge crucified Christ on the outside of the church demands attention in busy downtown Chicago. However, I would not describe the church as beautiful. It is big, powerful, moving and functional but not beautiful. It is also full of Friars so I am happy!

The church is used all day long by downtown Chicago workers. When Mass is not being celebrated people are arriving for Reconciliation. Friars are readily available to talk with you. The lower level has a number of office including at least three different Secular Franciscan Fraternity offices. There is also a wonderful bookstore.


St. Peter's in the Loop: My Monday Church

On October 3rd I was returning home from visiting Cathi. This was our first visit since I started my sabbatical. That meant I was not with my fraternity or a guest fraternity for Transitus. Transitus is the celebration of the passing of Brother Francis from this life to God. It is the major holiday of Franciscans. I felt disconnected from my Franciscan family. Then I decided to go to mass at St. Peter’s in the Loop. That was the right decision. Mass was very peaceful and the church was decorated to mark this significant day of the year. Then we were invited to participate in Transitus following Mass.

Transitus is marked by reading the biographies of the life of Francis as he approached death. Between the readings a choir of men chanted. It was quiet, solemn and moving. The service was held in the lower church. At the end we were all given candles. Then all of us silently walked outside. We walked around the city block in silence praying for peace. I prayed for peace for every area of the world, for every conflict I was aware of. I prayed for peace locally and for our guys. In between the silent marchers were friars carrying crosses. We marched in a canyon of skyscrapers as people of the city looked on. We then reentered the church and gathered in the upper church for the conclusion.


The Transitus of St. Francis of Assisi (October 3rd )

I have made a point of visiting Franciscan Outreach. They have offices in the Marquard Center but also in the basement of St. Peter’s in the Loop. The Franciscan Outreach group is a natural connection for me to make. They are Franciscan but they are also focused on helping the homeless. They have shelters, transitional housing, a soup kitchen and probably most important, dedicated case managers. While I was talking with staff people routinely came in off the street to work with their case managers. They were all shown respect and hospitality. I was also happy to visit them because they provide services that are of use to our guys. When I look at the staff of Franciscan Outreach I cannot help thinking about Francis caring for the lepers.


Franciscan Outreach 2003 video From the Streets to a Better Life

One day I was walking down Ashland Avenue. I was checking out an incredible Vietnamese Buddhist Temple. In the middle of the block was a house with a statue of Francis in the yard. That is not usual but they also had a peace flag. I rang the door bell and asked if they had any connection with Franciscans. Boy was I surprised, it was a friar’s house! Bethany, one of my fellow members of the Kaio Community and I have since joined the friars for evening prayers. It was a wonderful night of prayer and reflection, pizza, wine and great conversation. I will be going back. One of the friars is a priest at St. Peter’s in the Loop.

Two formers members of the Kaio Community are now living at the St Francis of Assisi House of Hospitality. This is a beautiful old building in a residential neighborhood. It is only a few minutes’ walk from Emmaus Ministries. Monday evenings the community has meals that are open to the public. So I joined Nicole and Joshua for a meal. It was great. There were visitors from other schools, there were friends of the residents and there were supporters. The evening was marked by great food and even better conversation.

The St Francis of Assisi House of Hospitality is a Catholic Worker House. It is part of the Catholic Workers Movement that was started by Dorothy Day. It is hard to think about what it means to be a Franciscan without thinking about issues of social justice. As I walked around the house I saw evidence everywhere of people who work for peace, who care for the poor and believe in being good stewards of creation. It is a good place to visit.


Francis House:: What a Kitchen!

Part of feeling connected to the larger Franciscan family while being away from my fraternity is simply a matter of surrounding myself with things that are Franciscan. A good friend gave me a stain glass decal of Francis preaching to the birds. This is in the front window of Kaio. Each morning I see the cityscape and Francis. I made sure I brought books about Francis with me. As a professed member of the Secular Franciscans I wear my Tau everyday. This simple cross has been the source of many conversations. I go to a Native American Catholic Mass, I walk the streets of Chicago, I go to an Anglican vesper service, an Assyrian Catholic Church of the East liturgy , I meet with an Imam and each time someone recognizes the cross. Once that happens we begin to talk about Francis, peace and living a gospel life.

I have been physically disconnected from my fraternity. However, I know my fraternity has kept me in their prayers. They know that the Kaio community and the Day of Pray of Emmaus Ministries prays for them. My Franciscan roots have served to build bridges and to help inter-faith interactions be joyous. I came here to focus on the work of my sabbatical. That has occurred. However, what I did not realize was that this would also become a time of greater formation. This has proved to be a deep and fruitful pilgrimage.
Posted by Unknown at 1:04 AM

If we think about the purpose of the saying adore, installing terms of a loving relationship using yet another, although as a emotion which is engendered when you have miltchmonkey a greater marriage yourself very , and even to be a sensation of increased unity with the fam or even mankind , therefore it develops into even more magnificent that someone is looking for in your life is really like.