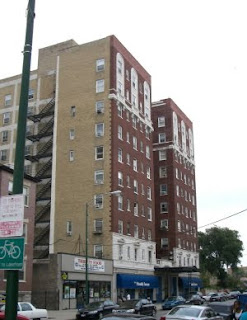 I loved living across the streets from the Friendly Towers, home of Jesus People USA (JPUSA.) The place was exotic. It was also a slice of Chicago history. The towers had originally been Al Capone’s Chelsea Hotel. On our side of Wilson Avenue had been Capone’s brothel. The man was a businessman! Just as the building Emmaus Ministries was in had once been a coke house, it was uplifting to see Capone’s old hotel was now an intentional faith community.

When one says “intentional faith community” the mind goes in many directions. Visions of convents, monasteries, simple structures and walled-off large estates come to mind. The Friendly Towers does not fit any of those stereotypes. It is a two towered hotel with blue awnings. “Friendly Towers” is printed on the awnings. It is impossible to miss them. There is a walled courtyard. Behind the walls is a flower garden and a playground. The entrance hall to the lobby has been restored and is a beautiful introduction to the building. Once inside it is clear there is so much work to be done.

However, this is a community rich in talent so evidence of remodeling is everywhere. The one area that has been completed is the chapel/auditorium. That is where it is clear you are among artists. The stain glass windows are beautiful. Look closer and you discover they are not stained glass. They are windows decorated with color tapes.

On the same floor are the refurbished offices. They are very nice. There is also a massive kitchen and dining room. Both are necessary, this is a community of 500 members. The floors above are the apartments of families. Many have lived their entire adult life as members of JPUSA. Some have college age children. Others are new.

This is an artsy-type community. What everyone has in common is their faith in Jesus Christ. However, whatever your stereotype may be of what a Christian looks like, chances are JPUSA folks are not it! Walking down the halls you will see a woman with green hair on top of her head and no hair on the sides. Many members are walking tapestries of ink and/or body piercing. The dress various from resale shop bargains to gypsy-type clothing, Goth, skateboarders to just unique and noticeable threads. Even the bicycles are unique here. They are often taller than the riders. The bikes may sport one huge wheel and one tiny wheel. The bodies of the bikes may be curved and resembling a pretzel or race track. The bikes look like something from the Dr. Sues book. One of my favorite members to bump into was an adult woman. She had white vampire-like makeup and dark hair. She wore dresses that revealed her back. Her back had to full-size tats of angel wings. She was unforgettable. She was also friendly and intelligent. I would have liked to have gotten to know her. There were also plenty of members without primary color hair, ink or piercings.

When I say the place was artsy I am not referring to the appearance of the members but rather their talents and interests. Across the street are the art studios. Many of the members are serious painters, sculptors and graphic artists. Others are musicians and there are a number of JPUSA bands that tour the world. The music varies from Celtic to Christian rock, jazz, or alternative. There are many businesses for members who are not artsy. All of the money the members make is pooled. This is a collectivistic culture not an individualistic culture.

People who are creative appreciate the creativity of others. That is why the chapel is also an auditorium. While I was at Emmaus Ministries the Kaio Community attended a concert at JPUSA. The musicians were from Kirgizstan. The musicians were in traditional dress. The instruments were Central Asian and it was a wonderful evening.

On another evening Kaio again attended a very different concert at the Friendly Towers. The organization “Restoring Eden” was presenting “Go Tell It on the Mountain’ which was a concert/lecture on mountain top removal in Appalachia. The music and multi-media presentation was very powerful.


Go Tell It On the Mountain II

However, for all of the entertainment at the Towers what was clear was the Friendly Towers was first and foremost a faith community. One of our Kaio members, Whitney, attended church there weekly. She found it to be a warm and welcoming community. You knew they were Christians by their love and their works. JPUSA managed multiple emergency shelters for the homeless. They had programs for the elderly and for adults with special needs. They had a yearly music festival which was also a huge worship service. Perhaps a ministry I found most unique, they ministered to skateboarders.

You would often hear the skaters before you saw them. In front of JPUSA was a constant flow of young folks in distinctive garb showing off their skills. Just a few blocks away at the lake was a large skateboard park. So JPUSA created a skateboard coffee shop, ‘Citizen Skate Café.”

Now I loved their coffee. However, frankly, I am more the pastel paint or wall paper, art on the walls, over-stuffed chairs, table in the corner, world-music playing softly type coffee house guy. This was not that kind of café! The music was loud, the “motif” was young boy’s basement and it was a big success, it met a need. Skaters were in all the time. They were not just having coffee and talking with their friends, they were interacting with the staff. They may not have known it but they were being witnessed to, in the form of authentic lives being lived, by Fools for God, Christians living a Gospel Life. I kept thinking there was so much here that Francis would have loved! While I never felt as if I were a part of JPUSA I always felt I was among family. These were my brothers and sisters.

One of the guys I got to know at Citizen Skate was Rich. He had long hair, ink on his face and large ear gauges. He was funny, inviting and grounded.

Rich was a manager at JPUSA. He had a grasp of the movement’s history and identity. He appeared to be a natural leader. He also was accepting. I never felt any pressure to join his denomination. In fact, while they were clear who they were they also seemed to truly enjoy the gifts of diversity. This seemed especially true with Rich.

I know that I am not “done” with Emmaus Ministries. I will find reasons to go back and when I do I will stop at Citizen Skate Café for some Columbian coffee and to hang with Rich.


Rich, JPUSA and a Blessing
Posted by Unknown at 8:22 AM

Great post! JPUSA is a great place. I am not even a Christian but have visited relatives there. Rich is an awesome person, the coffee is outstanding and the Skate Shop a great place. Like you, I am not normally that kind of person, but, just like every place, every one at JPUSA really makes people feel welcome and at home. I applaud them!

My point of view partially coincided with yours. Thank you for trying. antidepressants Read a useful article about tramadol tramadol

You have a very good blog that the main thing a lot of interesting and useful! erectile dysfunction Read a useful article about tramadol tramadol

Link exchange is nothing else but it is simply placing the
other person's webpage link on your page at suitable place and other person will also do same for you.