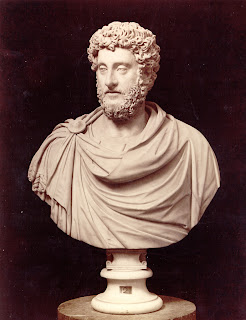 Today was a day of retreat. It was great. We had to choose between Benedictine, Franciscan, Jesuit spiritualities or Christian Completive Prayer and finally Family Prayer. I choose the Benedictine approach and could not have been happier. Because of that choose I was able to see and touch the Saint John Bible.

This was a great day for a variety of reasons. We all broke into new groups and interacted with different folks. We stopped acting like graduate students and acted like we were actually at a monastery!

I loved learning about the charism of place and time, of balance between labor and prayer and between listening and then acting.

Our spiritual class was in the chapel in Saint John Abbey Church. Afterward we had Mass and we all moved back to a different chapel in the back. During the homily we heard about St. Saint Peregrine the Martyr. St. Peregrine was a 12 year old boy in Rome during the reign of the Emperor Commodus. This is the same Emperor we have all seen in the movie The Gladiator. In the year 192 the Emperor demanded his subjects worship him as the demigod Hercules. Peregrine was one of four young men who refused to worship the Emperor. Young Peregrine was tortured. He was thrown in the dungeon. He was placed on the rack, he was whipped. Finally he was flogged to death with leaded whips. The young martyr’s relics have been venerated ever since.

So why the homily on this young man, as inspiring as it was? Because his remains did not stay in Rome. In fact, his remains were right in front of us. This was the first full relic I had ever seen. I saw many others but they were mainly parts or covered. Not so with Peregrine. Here was a skeleton with cloth and the red material to show he was a martyr. Now I am not a fan of relics, they kind of weird me out. Still, here I was in Minnesota being connected with the early Church, with a true martyr and with the Emperor Commodus.

I pay attention to modern martyrs. Sadly there ware far too many of them. The 20th century has been the century of martyrs.

So today I learned a Benedictine method of prayer. I saw and touched the Saint John Bible and I saw and spent time with St. Peregrine. All of this while being with my fellow travelers in Collegium. This was a day I would always remember.
Posted by Unknown at 3:37 PM