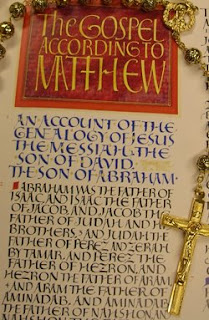 Today was our Day of Retreat. I attended the Benedictine Retreat. I did a lot of things today, all of them extraordinary. However, right now I only want to talk about one thing. I saw, I touched the Saint John’s Bible. After learning how to do Visio Divina, a modification of Lectio Divina I decided to see the exhibit on the Saint John’s Bible one more time. This is the first hand written Bible in over 500 years.

I went into the Hill Museum and Manuscript Library and asked to see the exhibit. My friends were going to see the related film. I told the guide I had already seen it and just wanted to look at the pages displayed. After about ten minutes I started to think perhaps there was a different movie about the Bible they were watching. I asked and I was right. So I went to watch that movie. It made all of the difference in the world. 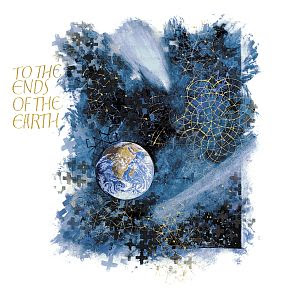 When the movie was over the director of the program had a question for us. A number of pages with their illuminations had returned from an exhibit. They were in special humidity controlled cases. They needed to be turned every day. He wanted to know if we wanted to go with him to the locked secured room to see and touch the Bible? What a question! Of course we all went.

The room housed art pieces from every century and every part of the world. Madonnas, Buddha’s, African Art and classical sculpture were everywhere. The cases that held the pages of the Saint John’s Bible were huge. It takes 20 hours to put the pages in the cases and one hour to take them out. However, they have to adjust to the humidity and that takes eight weeks. 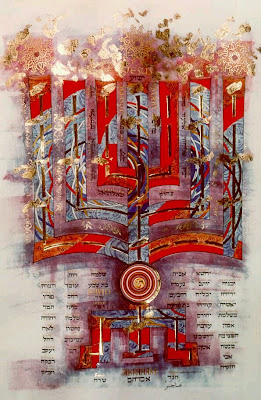 We learned so much. We touched the pages. They were vellum or cows skin. We touched them so we could tell the difference between the outside skin (it had hair) and the inside (it was smooth). We saw the veins in the skin. Some of the artist Incorporated the veining into their art. One artist used the veins in his painting of leaves. We learned that the thickest part of the skin was the skin against the cows spin. This was the part traditional sewed together to bind the book. That is why it is called the spine of the book. It takes two years to prepare the skins. 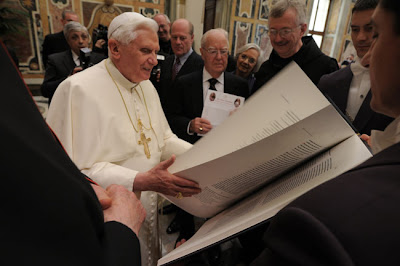 The art was fantastic. It incorporated Hebrew, Arabic, Aramaic and Greek whenever appropriate. It spanned the centuries and reflected this time. Adam and Eve were African. God was represented in gold but never truly pictured. However, the gold that was God was always polished. This was so it would be a mirror because we are made in the image of God and the reader can see him or herself in the reflection.

Donald Jackson is the chief scribe. He is also the scribe for the Queen of England. He started this project and teamed up with Saint John’s University. So the scribes are in Wales but the home for the Bible will be in Collegeville Minnesota.

Jackson has artists from around the world making illuminations, these are illustration with gold. It will take twelve years and over four million dollars to complete this project. It should be done in 2012. 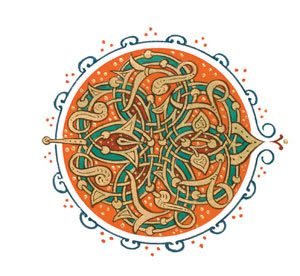 There are no drawing for Psalms. Instead the monks sang. The singing was recorded and the graphs of the music were painted/embedded into the script. 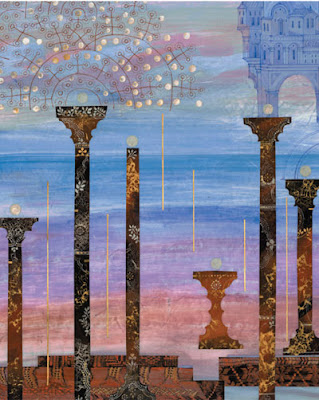 Another page had a foundation of blessing from all different languages and traditions and then the blessing are painted over. However, the blessing can be seen through the picture. It is to emphasize our pre-Christian past and are many traditions. The Book of Wisdom has no gold, it is considered a feminine book. So the gold is replaced with silver.

The Bible uses a Protestant translation of the Catholic Bible to increase ecumenical interaction. Themes of diversity, ecology, science, even the attack of the World Trade Center are pictured beautifully and provocatively in this Bible.

The materials used are also interesting. Gold is so thin that if you rub it the gold becomes powder in your hand. Minerals are often mixed with fixatives. An example would be mixing lapis lazuli with egg whites or egg yolk. The black ink consisted of candle stick smoke from the 1870s mixed with fixatives at that time.

There was a special knife for cutting quills and turning them into writing utensils. That is where we get the term “pen knife”. Many of the paints were over 150 years old. Still this was also balanced with the use of computers. The computer where never used in printing but rather in the planning of a page. This removed much of the guess work.

Finally, the vellum was forgiving. If an error was made it could be rubbed off and covered over. Still, this is a human document. That means that there are pages where you will see the corrections of lines forgotten written on the side of the text.

In early hand written manuscripts the benefactors would have their names written in the book. This is not appropriate for the Bible. So instead the insects of Northern Minnesota grace some of the pages. At other times the scribe working on a particularly difficult page will write commentary outside of the columns. The bible is a massive project. It will be over 1100 pages and will fill seven volumes, each weighing over 35 pounds.