I watch in amazement as Catholics and other Christians argue that global warming is bad science, that it is a myth. I don’t get it. How can one ignore science that repeatedly comes to the same conclusion, the planet is warming up and it will have catastrophic consequences if it continues.

Now I get people who argue this based on political considerations. I get it when radio and “news” people argue this. It is in their interest, they get more viewers and that means more money. I don’t get it when people who love the Creator don’t care about the creation.

Let’s assume we are in the middle of climate change and not global warming meaning it is not the result of human behavior. So what, do something about it. So what, deserts are still expanding, glaciers are still melting, island nations are still in danger of disappearing. The military establishments of nations are preparing for a world marked by increased fighting for limited resources, especially water and crops. Animals and plants are still becoming extinct at an alarming rate.

So I sit in wonder as I hear of people of faith who are only critical of the Copenhagen Climate Change Conference. The Vatican has not been remotely neutral about the conference. They have delegates attending. The Vatican is on record for planning to be the first carbon-neutral nation on earth. That requires planting trees in Hungary to compensate for the large carbon out-put of this tiny nation.

Now the Vatican is not without recommendations or clarifications. The Vatican spokesperson, Rev. Federico Lombardi, states that the solution cannot come only from nations, restoring the planet’s health will require behavioral changes from all individuals. Additionally, he voiced the Vatican concern that negotiated limitation on emissions must take into consideration the effects it will have on the poor of the world. 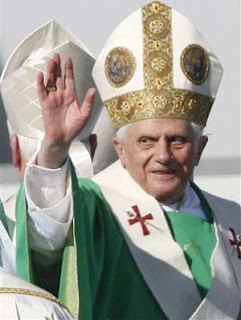 The Vatican has consistently been an advocate for the care of creation. Pope Benedict XVI has been referred to as “the Green Pope”. He has been seen as a strong ally to a number of environmental groups. This is a response to the Vatican striving to be carbon-neutral, to the Vatican installing roof top solar panels and the pope calling for Catholics to be “better stewards of God’s creation.”

There are too many important faith leaders calling for active changes in behavior to counter global warming for people of faith to ignore either them or the scientist. My favorite is Ecumenical Patriarch Bartholomew I of Constantinople. I first noticed his advocacy for stewardship when he attended a climate change prayer meeting and conference in Greenland. Just this fall he blessed the Mississippi River. He has called for a 40% drop in CO2 by the year 2020. He is a relentless prophet of caring for creation and as a Franciscan I could not be more impressed.

Christians of many denominations in Europe are calling for change. Church bells are peeling in support of the conference. Denominations are together celebrating a “Christingle’ services. How many times will the bells peel? 350 times! That number refers to the 350 parts per million which is the safe upper limit for CO2. Now that is support, that is a teaching moment.

I don’t know what the correct solution is. I know that whatever it is will call for sacrifice from all of us. It will also demand more from some than others. It will require our rethinking our use of coal. It will require we revisit an economy based on rampant consumerism. But then Christians are not called upon to get the most toys before we die, we are called upon to be witness to a generous Creator and the Incarnation that took place on this planet. So for those who fight the conference without offering a realistic counter offer please be aware that without change animals and planets will disappear, forever. People will starve and die. Nations and armies will compete for basic resources. Whatever your definition of Pro-Life is, it cannot be this.

I congratulate, a brilliant idea