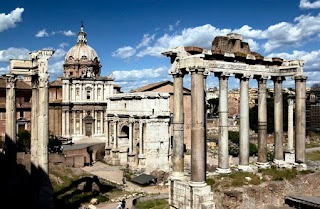 Pilgrimage is not a tour or a vacation. It is moving to a holy place both externally and internally. That means that the pilgrimage begins before a single item of clothing is even packed away in the luggage. It requires preparation, study and prayer. At our school this occurred under the nurturing guidance of Sister Anita Holzmer.

Having said that I suspect our students would have described December 27, their day of travel, as their first day of pilgrimage. Our students flew from Fort Wayne to Atlanta and then on to Rome. They gathered with other Midwest students in Atlanta. Another plane left from New York. Either way strangers were quickly getting to know one another. They were also getting use to a life that danced between structured time and time of quiet reflection.

The second day was their first real day “on” pilgrimage. They arrived in Rome and transferred to Casa Tra Ni. CTN is only a few blocks from St. Peter’s Basilica. The residents are clergy and religious and other pilgrims from all over the world.

The pilgrims would have had a brief orientation and then lunch (Pranzo). Afterwards they would go to their rooms for some much needed rest. They would then gather for their first of many liturgies. This would be followed by a walking tour of Ancient Rome. I remember how amazed I was at how extensive the ruins were. It was the capital of the largest empire in the world, why was I surprised?

They would then return to CTN for supper (Cena). Afterwards there would be an optional walk to St. Peter’s Square.

So in their first day they had liturgy in a building housing pilgrims from around the world. They walked among the ruins of emperors, senators, poets and martyrs. They spent time in prayer and reflection and they made new friends. Not a bad beginning!

I remember how busy the city was. How fashionable the people were. How everywhere there was a mixture of ancient, medieval and modern buildings, art and fountains. I remember the Tiber River and the many beautiful bridges, each different form the others. I remember the beggars and the black-market. Most of all I remember waling into St. Peter’s Square and seeing the pope’s office light one.

I suspect some of the students will not be from large cities. Some will not appreciate the noise and the fast pace of the city. However, all will be aware they are in the presence of the land of Peter, Paul and so many, many martyrs. I am sure they had a memorable first day in Rome.
Posted by Unknown at 6:09 PM