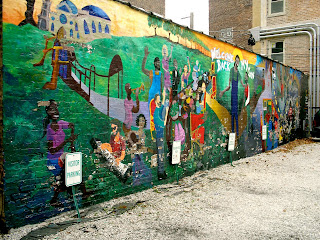 The first day of our alternative urban spring break proved to be a long one. Seven students; Amanda, Tiffany, Laura, Mike, Scott, Amber and Nora, resident life rep Lovey and I embarked on a week of volunteering with Emmaus Ministries in Uptown Chicago.

Emmaus Ministries is an ecumenical ministry that serves homeless men who participate in prostitution. We would be working in the Ministry Center making home style meals and we would experience Immersion Night in Boystown. This would prove to be different from our previous mission trips to Eastern Kentucky working with Christian Appalachian Project. In Kentucky we were physically challenged. This trip would challenge our ability to give up our judgmental natures and to simply be compassionate.

The students were excited driving along Lake Shore Drive. We stopped at Montrose Harbor for our first of many worship serves. We were becoming a team. We ended the4 services when Lovey placed a Tau from Rome and blessed by the Holy Father over each members head. For me the service was doubly moving. My daughter had brought the Taus back from Rome so they could be used for a special occasion.

Once we arrived we unloaded our belongings. The women stayed in an apartment behind Emmaus. The guys stayed in the chapel of Emmaus. We had some brief introduction and then we all walked with Al and Andi (Al is the director of ministries and the two are Stories from the Street) to a Thai noodle shop. There we had an exotic dinner with fantastic sticky rice. To be honest, there was diversity of opinion of the food! It was however a great time for all of us to begin to get to know one another and Al and Andi.

We then returned to the Ministry Center and our training for Immersion Night began. We were told of the desperate lives the men live. Many never had close caring families; many grew up in abusive homes or multiple foster homes. Many but not all are intellectually challenged or have serious mental disorders. Whatever the contributing factors are, these are hurting men that others shun. These are the lepers of today. These are the folks that even the homeless in the homeless shelters reject. These wee the men we would be serving.

We learned about all of the safety precautions. We prayed and we prepared for the night in Boystown. Now Boystown is the GLBT neighborhood around north Halstead Street. It is the home of many clubs as well as gat friendly restaurants and businesses. Our job was not to “fix” people. Our job was to walk around the area, interact with folks when we could and simply form relationships. We were to look at ourselves and try to discover what was getting in our way, what prevented us from recognizing god in each person we met. 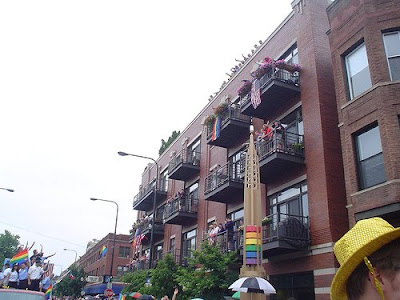 We then took the “L” to Belmont. We then broke up into 4 teams of two. I floated among the various teams. From 9:30 until 1:30 we walked around the area. Some of the members walked the streets observing and interacting with the people they met. Some sat in coffee shops watching and talking. Some went into clubs to observer and interact. Nobody had the same experience and nobody had the same reactions. Some were surprised at how much they were not surprised. Others commented that it was not all that different form anyone’s going out to the clubs. Some were clearly out of their comfort zone and felt almost violated. Whatever the reaction, we had all be exposed to the environment in which our men worked. We took the “L” back home and got to bed by 3 PM. It was a long and intense day. Ahhhh spring break!
Posted by Unknown at 6:31 PM