Killing in the Name of a Loving God 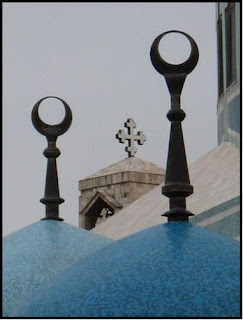 I last wrote about the increase in clashes between Christian and Muslim Nigerians. This is hardly news. However, one of the concerns is that people are assuming that it is mainly Muslims killing Christians. That is not the news coming out of Nigeria. The U.N. may be called to investigate a religious massacre of Muslims.

That this comes as a surprise speaks volumes about how many on each side see and hear what they want to see and hear. Last year I spoke with a priest from Nigeria. He was talking about the riots in his country after a Danish paper published cartoons of the Prophet Mohammed. First he was surprised that what happened in a paper in Denmark would have any impact on his nation, but it did. Next he told me of the Christian reaction to the Muslim riots. It was his belief that Christians caused far more damaged and harmed more people than the Muslims. It was also his opinion that neither side reflected the values of their respective faiths.

Many Christians are willing to believe it is only Muslims harming Christians in Nigeria. This is partially a reaction to the establishment of Sharia Law in Muslims states in that nation. Many Muslims in Nigeria would tell us that Sharia was a response to a government that was not able or willing to provide safety and fight crime. In fact many would describe their government as corrupt. It is a problem when Muslim religious law is applied to non-Muslims. At this time this is not the case in Nigeria. However, it does highlight differences in an already tense situation.


Killing at Will - Unlawful police killings in Nigeria

Now I do not want to sound like I am saying only Christians kill. That clearly is not the case. Last century is known to many as The Century of Martyrs. Estimates are that 65% of all of the martyrs of the last 2000 years occurred in the last 100 years.

I have written about attacks on Christians in Egypt, India, Iraq, and Sudan. I have addressed persecution of Christians in Viet Nam, China, and the Middle East. I become angry and sad when I think that ancient cultures in Iraq and Syria face the very real possibility of no longer existing. These are the Churches that speak the language Jesus spoke. These are Churches established by the Apostles. I worry that the Orthodox Church may one day soon wither in Turkey. I pause and pray for the Copts, one of the most ancient Churches in the world.

I also remind myself that many Muslims believe it took the West so long to respond to war in the Balkans because it was Muslims that were in peril. I am aware that for many Muslims the view of the West is a collection of nations that attack and kill Muslims, year after year. President Obama has been adamant that America is not at war with Islam. However, that must be hard for many to believe when the news story this week is of a rifle scope company in Michigan engraving coded New Testament verses on to scopes for rifles sent to Afghanistan and Iraq. While many Muslims must see this as evidence of a new Crusade they might be surprised to find out many Christians are insulted that verses from the Prince of Peace would be used on an instrument of war.

There are too many of us, Christians and Muslims, on this planet to simply ignore one another. Too many mothers have held their dead children in their arms trying to understand war in the name of a loving God. Too many husbands have seen their wives and daughters abused and raped by followers of “the Other”. Too many houses of worship have been attacked and destroyed to defend a God who is more than capable of defending Himself. This is a small planet and the followers of a loving God have a clear task to follow on this small piece of earth. We are to love one another. The archbishop of Jos Nigeria called for work projects that require Muslim and Christian youth to work side by side. He is a wise man. We must begin to get to know one another. We must begin to know people with real names, real faces, real families and real feelings. Maybe then it will become harder for us to treat each as less than Children of God, maybe then our sisterhood and brotherhood as Children of the Creator will become real.
Posted by Unknown at 11:28 AM