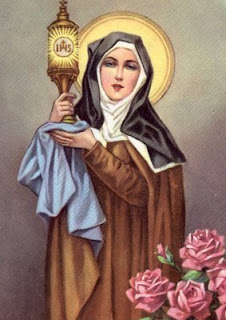 Today was a happy day, I spoke with my daughter. She called from Assisi to tell me how much she loves the city. Like that is news, it would have been news if she didn’t love this holy city!

Today was the day the pilgrims came face-to-face with Clare. For so long she was the over-looked Franciscan and yet she is a key founder of the Franciscan family. Clare wrote far more than Francis. She lived longer. She stood up to popes, influenced nobility and changed the lives of many while living a cloistered life.

The pilgrims visited San Damiano. That was by far one of my favorite places. You walked out of the city and down into the valley. This was the site of Francis conversion while praying before the San Damiano cross. Replicas of the cross are in every room on our campus. I love it’s stylistic, iconic story-telling.

The pilgrims spent time in the Basilica of Santa Chiara. This is the home of the remains of Clare. It also houses other relics, the Order, habits and above all, the San Damiano Cross. I would visit this church every morning before breakfast. It is a quiet, impressive center of spirituality.

The church has minimal frescoes compared to some of the churches in Assisi. Frescoes were very colorful wall paintings, “poor man’s art.” However, the churches of Assisi also served as hospitals during times of plague. When they served as hospitals the walls were washed with lye and water which dissolved the paintings. The paintings were also damaged by earthquakes and Assisi is an active earthquake zone. The result is that the basilica is wonderful but the walls are plain. 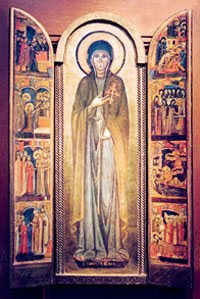 The church is also the home of the Tavola of Clare. This is a painting on a door size piece of wood. Clare is in the middle and around the picture of Clare are smaller paintings that tell of important events in her life. I was first introduced to the Tavola by Sister Felicity and Dr. Kumfer. I use the tavola technique when teaching Psychology of Personality.

Finally the students would visit S. Maria Maggiore. This was the home of the bishop and the cathedral church of Francis day. This is where the renunciation took place. Francis took of all his clothes and handed then to his father and then depended on his heavenly Father for the remainder of his life. 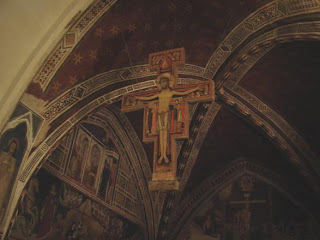