Today the students/pilgrims begin the part of the pilgrimage they have most anticipated, they come face-to-face with the places where the saints grew up, transformed and in the process transformed a Church. Today they begin to explore the homes, churches and streets of Assisi. I remember visiting the New Church or Chiesa Nuvoa. This was where I first felt connected to my family back in Indian. We visited Francis childhood home. We walked the cobbled streets of Assisi, Below us the valley stretched out, above us was the walls of the city and the birds, there were so many birds.

The pilgrims will learn to see the parents of Francis as real, breathing people and not just the stereotype of an indulgent mother and a cold father. They will see where Francis was held prisoner in his own home by a very frustrated father.. They will visit San Rufino, one of my favorite sites in the city. It was here that Francis and Clare were baptized. It is only minutes from Casa Papa Giovanni. The church is full of artifacts, early Roman art and is dedicated to the patron saint of the city. 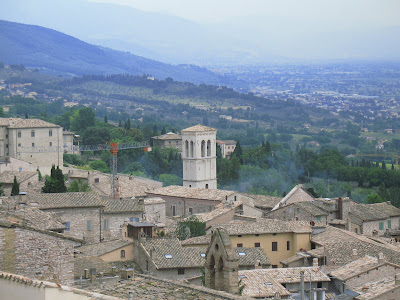 The pilgrims will participate in a historical tour of the city. They will learn about it’s early Etruscan beginnings, its Roman and then Imperial Roman beginnings. This was a pagan city. It had a temple and a circus. There is a forum that can be explored that is under the piazza. They will learn about medieval life and about the medieval caste system, or, ‘everything rolls down hill.”

By the end of the day they will be able to navigate the streets by themselves. This is no little feat. There are no flat areas to the city and few straight streets. Still Clare is at one end and Francis the other. Up takes you to Rocco Maggoire and down to San Domiano or the Porziuncola.

They will go to the Cathedral of Francis day, the site of the Renunciation. The site is old, Roman excavations in the basement reveal the home of a Roman poet. Outside the street covers old Roman streets. 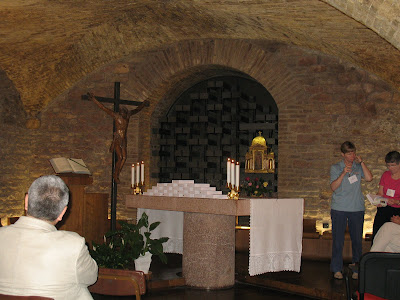 The pilgrims will also quickly fall in love with Casa Papa Giovanni. The chapel was an old stable. There is a library, the rooms are simple but the views wonderful. There are three roof top gardens. This will be their home for the remainder of the pilgrimage. They will pray here, eat here and rest here. When they finally leave they will know they have left a very special place.


ASSISI: A Tribute to St. Francis and St. Clare
Posted by Unknown at 4:10 PM