AFCU 2010 Symposium at the City of Churches 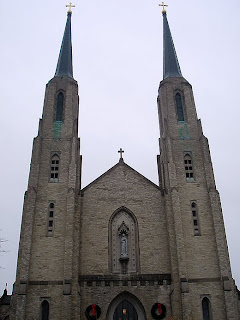 Almost three hundred folks from 22 Franciscan colleges and universities will be meeting at the campus of the University of Saint Francis Fort Wayne next week. They will be attending the Association of Franciscan Colleges and Universities 2010 Symposium. It seems only appropriate that the symposium be on USF’s campus. The campus is a beautiful blend of trees, birds, critters and building and the theme is about Caring for Creation. It also seems appropriate that they will all be meeting in Fort Wayne since one of the city’s many nick manes is “The City of Churches.”

For those folks who are driving through the downtown area they are sure to notice the many churches of various architectural styles standing proudly. These were the ethnic and religious anchors of an earlier time. They are still active “flagship” churches of their respective denominations.

In the middle of downtown, across from the botanical gardens and kitty corner from the Hilton is the Cathedral of the Immaculate Conception. The Diocese of Fort Wayne-South Bend has co-cathedrals, the other is in, well, South Bend. The Cathedral sits in the middle of the Cathedral Square. This includes the McDougal Chapel, the Chancery, the Cathedral Center and the rectory. This is a recently renovated and beautiful church. It has a history connecting it to the Miami Nation, French North America, German immigrants and the early history of Indiana. Today it is a diverse church. Some of the attendees will take of tour of this beautiful building.

Only a few blocks east is St. Mary’s Parish. This was a magnificent gothic church but alas a bolt of lightening destroyed the building. The fire however did not destroy the church. The church was rebuilt. While it is now a modern structure it is what it does that is so special. This simple church is loaded with mission to the poor. St. Mary’s Soup Kitchen, Ava Maria House, and Matthew 25 Medical and Dental Clinics are only a few of their many missions.

Two blocks north of the Cathedral is the Archbishop Noll Center. This building houses “Today’s Catholic” the Catholic Bookstore, the Cathedral Museum , diocesan offices and the bishops offices.

However, this is the City of Churches not “the Little Vatican!” A very modern looking church is the Fort Wayne Street United Methodist Church. The straight lines, beautiful window and light interior make for a calming place to worship. It is also an active church with many missions. 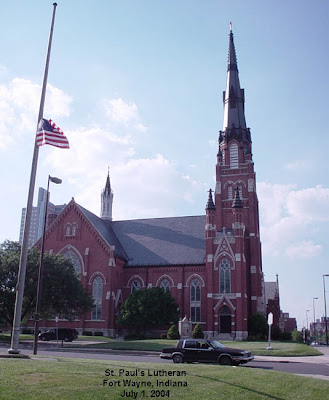 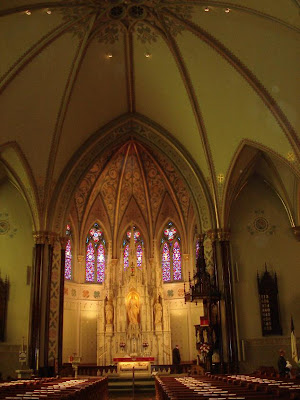 Going west the visitors will come to Trinity English Lutheran Church. At a time when the city had a very large German population the name indicated that these Lutherans would have their services in English. The church may look familiar to some visitors. That is because of the distinctive architectural style of the church. The church was destined by the architect who designed the cadet chapel at The United states Military Academy at West Point. 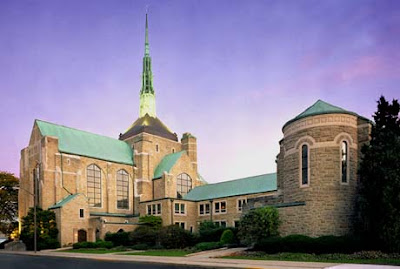 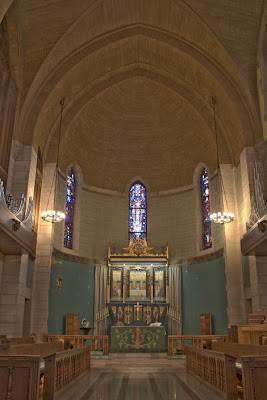 Just west of the church stands Plymouth Congregational Church. This is a very active church that often works with other denominations. Every year the church hosts a Reconciliation Service on the weekend of Mart Luther King Jr.’s birthday. The service is attended by most denominations and is a moving, inter-faith service.

In the same area stands First Presbyterian Church. This is the oldest continuously running congregation in the city. It has an active Korean congregation. It is famous for it’s art gallery and it’s music program. However, it is best known for its theater. This is a church with a social conscience but also a church that expresses its appreciation to god through the arts. 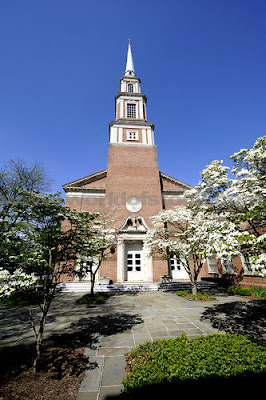 Further west is the Trinity Episcopal Church. It stands out with it tall, narrow steeple. Many of these churches competed to have the tallest steeple in the Summit City. The church was a pioneer church. It was built in the Greek Revival style. While it ministers to youth and the poor it is also known for it music ministry. The church houses an extensive archive of Indiana Episcopal history. One of its ministers, Dr. Steve Crain also teaches theology at the University of Saint Francis. 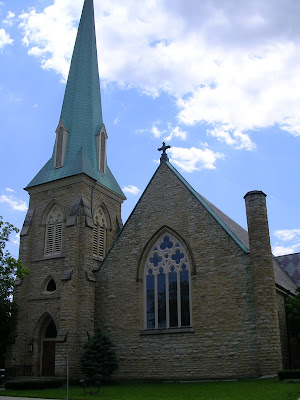 The city is the home of Concordia Seminary. It is also is the home to three denominational headquarters: the Fundamentalist Baptist Fellowship Association, Missionary Church, INC., and Fellowship of Evangelical Churches.

The symposium attendees may notice that Fort Wayne is a diverse city. That is reflected in the churches. The Cathedral is multi-ethnic. Many of the areas Catholic Burmese attend the Cathedral. St. Peter's Catholic Church is a German church. The Stations of the Cross are written in German, it is home to the initial liturgies each year for Germanfest. St. Patrick Parish is home to three distinct congregations. Services are said in English, Spanish and Vietnamese.

The city is home to St. John Chrysostom Antiochian Orthodox Church, Holy Trinity Greek Orthodox Church, St. Nicholas Orthodox Church of Fort Wayne and St. Mary’s Romanian Orthodox Church. Yep, we are the City of Churches. If the symposium attendees are looking for one more thing to see, one more place to worship or simply want to appreciate beuty in unique settings, well, then they came to the right place.
Posted by Unknown at 8:16 PM

Very nice pics of churchs, however the Lutheran church in Ft. Wayne mention is in no way the "largest" in the nation - in size or membership. Myriad others are bigger throughout the country, including many in Minnesota (Central Lutheran, Mnpls in size for sure), and Mt. Olivet in Mnlps with nearly 14K members as examples.