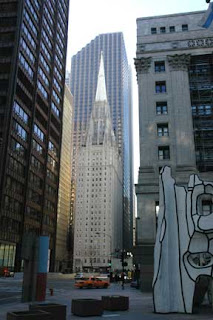 I remember as a kid taking a tour of the United Methodist Church Chicago Temple. It was this tall building downtown with this tiny chapel at the top. I loved it and always wanted to go back. Well, I did. Chicago Temple is across the street from Daley Plaza. Next to the temple is the Miro statue, across the street is the Picasso. Lets face it, the temple is in a good neighborhood!

I teach Introduction to Individual Psychology at the Alder School of Professional Psychology. The school is two blocks away from the temple. So one day after teaching I went to Mass at St. Peter in the Loop. Afterward I rushed to the temple for its 2:00 PM tour. Boy was it worth it.

The Chicago Temple is the oldest church in Chicago.. The church was founded in 1831, that makes it six years older than the city. Five church’s have sat at the current location. The first was floated over on a barge. It was a one room church. One of the churches was burnt to the ground during the Chicago Fire. The current one is a multiuse building. When the current building was completed in 1926 it was the tallest building in the city. It is now eclipsed by its neighbors!

The church is the highest church above street level. The chapel, 26 stories above the ground is considered a powerful instrument of prayer. The ceiling has a cross. Above the chapel is a cross and the chapel and the alter in the sanctuary are united by the themes of a weeping Jesus. It is as if the chapel is a responder and receiver of prayers.

The church also has a very powerful cross. This was a crucifix created from an instrument of hate. The KKK had set a cross on fire in front of a Methodist church that advocated for integration. The cross was taken by the church and presented to Dr. Martin Luther King, Jr. the cross was then handed over to an artist. The creation was of Jesus represented as an African American whose suffering is being offered up. It is impossible to gaze upon the crucifix and not be moved.


The Cross at Chicago Temple

The church is not just a building, as impressive as the building may be. The church is people and the people here are welcoming. The receptionist acted as if she had been waiting for my arrival. The guide knew the history of the temple and the congregation. However, he also knew how to make his guests feel welcome.

So I had a great tour. The sanctuary was breath-taking. The chapel felt intimate and special. There you are so high above the buildings and the city and yet so small compared to God. Finally, I was able to walk out on the gardens. This is a roof top garden at the 23 floor. Below is the Daley Center and the city, above the tower. This is a structure designed to focus one on God and to provide cosmic perspective.