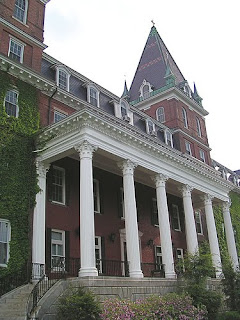 Day five was a day of varied activities. Right after the working breakfast meeting there was Morning Prayer and then the Disciplinary Groups. I skipped out on both. My second day at Collegium Joyce approached me and asked if I would be willing to direct a Franciscan Retreat on Retreat Day. After thinking about it I said yes. Well Retreat Day was less than 24 hours away and I used that time to prepare my retreat.

The next group meeting in the morning was modified groups that talked about “A World in Need of Redemption.” It was really the other end of the continuum of sacramental living. It addressed the role of evil in the world. I was impressed with how our group started talking about their responsibilities as professors. They focused on what they could do in their little corner of the world to make a difference. They were great.

In the afternoon we addressed the Pelikan book; Jesus Through the Centuries: His Place in the History of Culture. We talked about how Jesus was depicted in art through the centuries. The campus was a good place to have this discussion. The statue of Christ the King, the statue of the Hand of Jesus, the Stations of the Cross, and other religious art set people in a reflective mood. One of our members talked about religious music that inspired hm. He also spoke of touching the art of Rome and seeing the art with his hands. The discussion helped members realize which images of Jesus were most powerful for them, which images were called up at different times. In our group it was interesting to hear about the images that were called up by members who were not Christian.

The Prayer/Spirituality group then focused on “Where Do We Need Healing? Where Does the World Need Healing?” The service tied the first discussion on redemption to our depictions of Jesus as the source of healing. Afterward we celebrated Mass. We then had dinner at Kimball Hall. Afterward many went to a social hour. It was a very good day.