Collegium 2011: What Made My Group So Special? 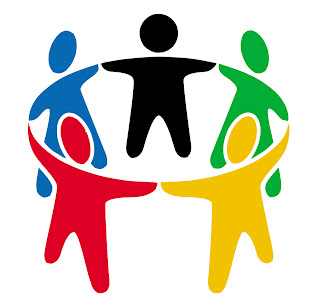 I made the claim all mentors should make, that their Small Group was the best. I hope all the other mentors feel that, I also know my group was special.
Jonathan was this very bright Ph.D. candidate in history from Fordham University.He was bright, funny and caring. Life is not fair, he was also tall, in shape, handsome and had great glasses. Still, while he could have been arrogant he was humble and a team player. He was also incredibly easy to like.

Skylar was a Political Science doctoral candidate from the University of California Santa Barbara. He was a serious pianist in high school and he skied competitively. He had an incredible ability to appreciate multiple sides of an argument without being immobilized by the divergent arguments. Our Small Group was successful in convincing Skylar to play a small concert for Collegium prior to worship. The video I have is of Skylar practicing for his concert. His concert was wonderful, his practice is just getting use to the piano.

Ricardo brought a sociologists appreciation of group processes to our Small Group. He had also lived in Central America and had an appreciation for the need for social justice. He also was able to apply our lecture on Catholic Social Justice to his school. Plus he lived in New York which just made me jealous. I suppose there were moments when he was not smiling but I never witnessed those times.

Cara was the enthusiastic English professor. She was also a self-identified secular Jew. It was great to see Catholic Intellectuals Identity though her eyes. She savored everything Collegium had to offer and like Ricardo she could not stop smiling.

Mark was our resident physic and the scientific method was a corner stone of how he made sense of the universe. He was also a self-described “Protestant Atheist.” Mark questioned our readings, the lectures, the movies. He questioned things enthusiastically. He also respected others and he was just fun to be around. One of the strengths of our group was due to the honest challenging that Mark provided.

Judith was this wonderful art historian. Now I have a bias, I have never met an art historian who is not brilliant, after working with Judith I can state that is still true. Judith savored life and was able to put ideas and reading into an historical context. She was also deeply moved by the sufferings of others. She made sure our intellectual explorations did not ignore the impact teachings have on real people. She also had a contagious smile.

Ray was our theologian. I was at first threatened by that when I read the bios. I suspect I feared looking under-qualified to lead the group next to someone with his qualifications. Boy that was a waste of time! Ray had to be the easiest person to get along with I had met. He was caring, funny and practical. He made theology and our readings come alive. He was able to describe how our readings were lived in his classes. Ray is the kind of guy I would like to spend time with talking about theology over a couple of beers.


Collegium 2011: Skylar Practicing in the Fog

Sonalini was our multi-talented professor. She taught women’s studies and political science. She was a Hindu teaching at a Catholic university. I loved how open she was to the entire experience. She was able to find areas of commonality. She was able to better understand where her students and colleagues were coming from. I appreciated how seriously she took the assignments of the Small Group. Best of all she was simply good company. She is now a fellow Hoosier and Judith is a neighbor in Dayton Ohio. I hope I get to see both of them in the future.

That was my group. It was a group of very diverse people. It was a supportive group, a happy group and a group that took advantage of all hat Collegium had to offer. Yeah, I had the best group!
Posted by Unknown at 7:47 AM