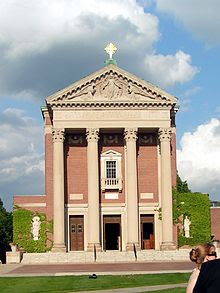 Day three was the beginning of our regular work schedule. Not that anything was regular. There was always something different and unique added to the schedule each day. However, this was the beginning of the mentors earning their keep! We were happy to begin the work of Collegium.

As usual we began with our planning or working breakfast. I liked this because I would get up early and walk the campus. By the time the meeting started I was ready to begin focusing on Catholic Intellectual identity. I was ready to work with my colleagues and to help my Small Group form its own identity. I also loved the breakfast meetings because we got to interact with the kitchen staff. They were the friendliest group of people around. I know we Midwesterners think we are the friendly Americans, well, we got company!

We had two small group meetings. The first was for us to get to know one another and to talk about the upcoming week. I really liked my group. It was academically diverse, religiously diverse and in so many other ways diverse. We did not just have Catholics of differing experiences and questions. We had Protestants, an atheists, a self described Secular Jew and a Hindu. The group differed in disciplines, age, abilities. Two were graduate students. They all brought so much to the group.

The second small group meeting of the day was actually to get to work. That work was in part a response to the talk Tom gave. Tom spoke in the Rehm Library, a small but elegant library in Fenwick. Fenwick was named after the bishop who founded the school. Tom spoke on “What if Our Work Mattered? Thinking About the Intellectual Vocation Today.” The talk grabbed people’s attention. When we returned to our small group rooms people immediately got to work.

We then went to the St. Mary’s Chapel for prayer and spiritual training. St. Mary’s chapel is the lower church. Above is the more formal St. Joseph Chapel. Both were beautiful but also very different from one another. Prayer and worship would occur daily. Each day we would be introduced to a new form of prayer/reflection/meditation. Our spiritual directors were old (but young) friends, Marty Kelly and Megan Fox-Kelly. I first met them in Portland. They bring a quiet, comforting touch to Collegium while introducing folks to new ways of faithing. I am always happy to spend time with them.

After our spiritual direction we all celebrated the Eucharist. The setting was lovely, the company was great and the sense of being connected to other Collegium fellows, to other faculty members of Catholic Universities and of being part of the Body of Christ was powerful.

Afterward we all had dinner together. Later in the evening many participated in the social hour. It was simply a time to enjoy each others company and that was so easy to do.


Collegium 2011: An After Hours Social