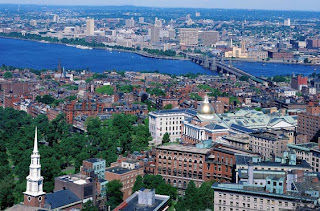 The week at Collegium was coming to an end. It could have been depressing having something that was so stimulating and so joyful coming to an end. However, it was not. This was the day that ended after the afternoon Small Group. After that we got to play in Boston. Some folks planned on going to the Pops, others to see Blue Men. Me, I planned on walking around discovering the city. There was no time to be depressed. However, first there was work to do.

After Morning Prayer and the Prayer/Spirituality class we had a major presentation. Christine Firer-Hinze from Fordham University spoke on Catholic Social Thought. She gave a history of Catholic Social Justice. Issues of aligning with workers, caring for the poor, being in many ways counter-cultural permeated her talk. When we met in our Small Group the members were able to readily apply the talk to their universities and to their careers. They were also surprised and encouraged to find a history of social involvement that reflected many of their values. At the end of the day I was reminded of the lecture in a surprising way.

Unfortunately the weather was not exactly perfect for being a tourist. It rained on and off during the day and promised to rain more in the evening. Still, it was 4 PM and time to drive in to Boston. I had the bus drop me off where the folks going to the Pops stopped. As I descended the steps I saw a wonderful church. Turns out it was the Christian Science Cathedral. In front of it was a reflecting pond. Behind it was downtown Boston. Even in the drizzling rain I was happy to have this be my first contact with Boston.

After viewing the church I walked over to the Boston Museum of Fine Arts. It was incredible. There were floors of Egyptian, Roman and Greek art. There was sculpture, glass, impressionists painting. It was wonderful. However, I only had six hours to see Boston so it was back out into the rain.

Luckily as I was walking past the Christian Science Cathedral I noticed it was open. I went inside and explored. I always associated Christian Scientists with reading rooms. This was incredible. I felt like I was in Europe.


Collegium 2011: Inside the Christian Science Cathedral

After my tour it was time to see more of Boston. I wanted to walk some of the Freedom Trail. As I walked toward it I came to the Boston Public Library. It was raining hard so I went inside to dry off. I was stopped in my tracks by how beautiful the entry way was. It reminded me of the Chicago Cultural Center.

As I walked around the library I was amazed at the size of the library. I was impressed with the collections. It was impressed with how friendly the staff was. If I had the time I would have spent the day there. The library also hosted social events. I don’t know what was going on but was there were folks in formal dress sipping wine and listening to chamber music. What a great place.


Collegium 2011: Inside the Boston Public Library


And then I bumped into the courtyard. What a wonderful surprise!


Collegium 2011: The Courtyard of the Boston Public Library

After the library I began what proved to be a long walk, I walked to Boston Commons. There I came up to a church that reminded me my Unitarian-Universalist roots. The church was beautiful. However, the church was closed, it was raining and I had more walking to do.

I walked through Boston Commons. I stopped for some pizza. By then every part of me was wet. My jacket must have weighed 15 pounds. After dinner I began my trek on the Boston Freedom Trail. By the time I was done I had seen the State Capitol, the Old State Capitol, the first public school, King’s Chapel and the site where the Boston Tea Party was planned.
When I came up to the State Capitol I was reminded in a very real way of our earlier lecture on Social Justice. It was raining out and young adults were camping outside. They were holding vigil to protest harsh immigration laws that wee being voted on in the Capital. I was feeling a little sorry for myself walking in the rain and these folks were sleeping in it to help others. I was humbled and encouraged.

So that was my day. We learned about social justice in the morning, talked about it in the afternoon and then I saw it in action that evening. I also got a hint of Boston and I know I have to come back for an extended visit.
Posted by Unknown at 7:20 PM


A fascinating discussion is definitely worth comment. I do think that you should write more on this subject, it may not be a taboo matter but generally people do not discuss these subjects. To the next! Many thanks!!

oZzy moved away earlier, I miss his cock, and i am always hungry for intercourse.

Feel free to surf to my website hcg injections