All of Uptown is a Stage... 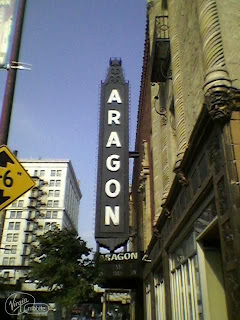 One of the things I enjoy about Uptown is its rich history. I especially enjoy the fact that the entertainment industry played such a prominent part of the cultural landscape of the neighborhood. Emily and I got a tour of the Essaney Studios. The studios were the holiday of the 1900s. This was where the first American Sherlock Holmes movies were filmed. The first American version of The Christmas Carol was also filmed here. The studio made cowboy films, received to Oscars and was home to stars including Charlie Chaplin and Gloria Swanson.


Essenay Studio and the Early Film Industry in Chicago

The studio is now home to St. Augustine College. The school is a bilingual school. It is supported by the Episcopal diocese of Chicago. Our tour guide was the Dean of students. We actually stood in the studio where over 1000 movies were made. We also visited the chapel which was created out of a movie storage shed. I made sure I touched the walls of what was America’s “First Hollywood.”

Most of the remnant of the entertainment industry is at Lawrence and Broadway. This is the area of the city that was home to Rag Time, Swing, Jazz, Big Band, Rock and Roll and now Hip Hop. Look wouth and you see the Rivera Theater. This was a gain movie theater that was at its height during the 1920s and 30s. It had nursing rooms (for injuries) and a toy filled play room for children. This is because the owners actively attempted to get women to go to the movies at a time that was considered provocative for women. The theater was ornately decorated. Today the Riviera is still used as a concert hall.

Across the street from the Aragon Ballroom is the Kinetic Playground. It is a through back from my youth and has an underground feel to it.
Just north of Lawrence is the gigantic Uptown Theater. This theater was THE movie palace of Chicago. It had4,500 seats. Visitors were overwhelmed with the opulence. Today it is a gigantic empty building waiting for someone to throw a fortune into it to renovate it to it days of glory.

Next to the Uptown is the Green Mill. This was a speak easy and Jazz bar. It is still a popular destination today for history buffs and jazz fans. A few doors down from the Green Mill is the Annoyance thereafter. This is a more modern establishment that specializes in cutting edge humor and satire.

Across the street is the Bridgeview Bank (formerly the Broadway Bank). This unique curved triangular building was recently used in the filming of public Enemy Number One.

All of this history and current performing art is surrounded by coffee houses, Ethiopian and West African restaurants and Thai restaurants and a sushi bar. Yep, it is a great place to take a stroll through.
Posted by Unknown at 3:35 PM