The Feast of St. Nicholas 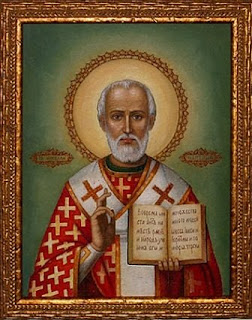 Today is the Feast of St. Nicholas. Now I know I am suppose to say that Francis is my favorite saint, but before he touched my life there was Nicholas. Everything about the saint’s life is moving. Here is a saint revered by both the Orthodox and Catholics, a saint honored by Protestants.

This is a man who was orphaned at a young age. Here is a man who well before Francis gave up everything to care for everyone else. I don’t know what is legend and what is fact. However, it does not matter, both move me.

The legend is that he secretly gave three bags of gold to a widower so that his three daughters would have dowry. The implications are important. Depending on which story you read the kindly bishop either saved the girls from prostitution or slavery. Equally important here is that the bishop did not want credit for his acts of kindness.

He was a bishop in the East and during the 3rd century. This is important. He was bishop at a time when the Roman Empire was still pagan. He was taken prisoner and he was tortured. Still, he kept his faith and when released continued to serve his people.

His existence reminds us that Turkey was once Christian and not only that but an important center of Christian-Greek Culture. He is the person who history would morph into Santa Clause. Speaking of morphing, if you would like to get an idea of what the real Nicholas looked like go to this hyperlink. It will take you to a site that has used technology to recreate his face, it is sort of like CSI meeting EWTN!

My confirmation name is Nicholas, I couldn’t have made a better choice. When I was in Assisi the foundation of St. Nicholas Church was right there in the piazza. The tourist center was on the site, the forum was under the foundation. I made sure I had contact with the building everyday I was in Assisi.

This month a new movie on the life of the historical Nicholas comes out. I hope it is good, the trailers are certainly intriguing. I look forward to watching it. So, go fill some stockings, go do a kind deed, go enjoy the Feast of St. Nicholas!


St. Nicholas of Myra
Posted by Unknown at 6:02 PM