Goodbye and Thank You Odetta 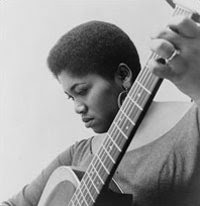 Tuesday folk singer and civil rights activist Odetta Holmes died, she was 77 years old. Odetta did it all. She was part of the March on Washington with Dr. King. She sang at the Newport Folk Festival. She sang with the likes of Woody Guthrie, Pete Seeger, Joan Biaz, Bob Dylan and Tracy Chapman. Yep, like I said, she did it all!

Odetta was known mostly by her first name. What many did not know was that she was classically trained. That did not prevent her from singing slave songs and African melodies. As a performer in the Old South and the not-so-enlightened North she also experienced discrimination and hate. She stated singing helped her escape hate, it couldn’t grow as long as she sang, so she sang, and she, sang and she sang.

She sang at Carnegie Hall, she sang from coast to coast and during the historic March on Washington it was her voice that sang the haunting, “O Freedom.” She was a powerful Amercan voice that inspired Rosa Parks, a movement, musicians from many backgrounds. She was described as “a force of nature”’ Tuesday that voice was silenced, that force died and she will be missed and her having been with us will be celebrated. Goodbye Odetta and thank you for your song and your drive.


What a friend we have in Jesus