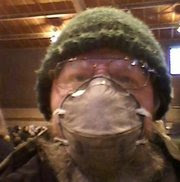 I did so many things while on sabbatical. I of course did outreach and worked at the Ministry Center of Emmaus Ministries. I also taught a course at the Adler School of Professional Psychology. I went to a boat load of ethnic churches. However, one of the coolest things by far was being an extra in a movie.

Cathi called me in September and told me they were having a casting/audition for a movie called “Contagion.” She wondered if I was interested in trying to get a part. Was I? I hate lines and I have no training in drama. That did not stop me. I went to Lincoln Park and stood in a line that went on and on and on. We were all given a form to fill out. It had our height and weight for costume fitting. It had a work history and a place for special skills. I had none, I did not juggle, fire dance or train animals. We were brought into a building in large batches. Then we were told about the movie, roles available and where and when the shootings would take place.

There were a number of films being made during my stay in Chicago. They had just finished up Transformers III and were getting ready for another sequel of Batman. Many of the folks I waited with had been in the films. They all had great stories to tell. It was actually a great deal of fun just waiting in line. 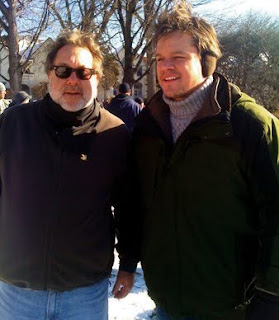 Hearing about the movie was exciting all by itself. The film is directed by Steven Soderbergh . It is loaded with stars including Matt Damon, Kate Winslet, Jude Law, Marion Cotillard, Gwyneth Paltrow, and Lawrence Fishburne. None of the actors were at the casting, they were in Hong Kong at another set for the movie. The movie is about a virus that kills one fifth of the world population. It takes place in Asia but the disease spreads. While much of the movie is filmed in Chicago many of the sceneces are of other parts of the country. It is a movie about the CDC, scientists, the military trying to keep order amidst chaos and it is about survival. Since I specialize in disaster mental health the idea of possibly being in this film, even for a second, was just too cool.

So I had my interview, handed in my paperwork and head shot and was told they would call me in early October. Well, October and November came and went and no phone call. I wasn’t upset because I thought it was pretty exciting and unusual just to have tried out in the first place.

I was at the Emmaus Ministries office when I got a phone call. The casting agency wanted to know if I would be interested in being an extra the first Friday of December. It was two weeks before I went home, time was running out, but what a cool way to end my sabbatical. I immediately said “yes!”

The filming took place in Evanston. I arrived at 6 AM. We gathered at a parking garage in the downtown area and then were bused to a gymnasium of Northwestern University. We were divided into groups. Many folks were National Guard extras. Some were police and sheriffs. Some were Hazmat folks. I was a townsie. A number of folks were identified as folks who were going to have been contaminated. The makeup artists painted their faces right in front of us. It was amazing how they used only a few light colors and were able to make the people look like they were really ill.

After breakfast and orientation we all walked over to a park. The scene was supposed to be a town in Minnesota. Since it was already very cold and snow was everywhere it looked the part. We were part of “The Great Food Drop.” There were military hummers, FEMA tents and crane holding a pallet of food. This was to be the helicopter food drop. There were 600 extras. We all had hats and masks or hazmat suits on, we would not be easily recognized on the big screen!

The scenario was of a town I Minnesota that had been quarantined. FEMA and the law decided they needed to get food to us. As the crane lowered the pallet two huge helicopter fans blew snow and white sand so that it looked like a helicopter drop. It was freezing and the casting company was handing out hand and foot warmers.

The first scene I was in was of the town people waiting in line to get food. I ended up right behind the camera. I thought, “great, I will never be in the movie this way.” Then I looked next to me and there was Matt Damon. For the next hour I was either next to him or a few feet away. We never interacted but it was fascinating to watch him work. It was also incredible to watch the director continually change the scene and each variation looked better than the time before.

It was interesting to see the set moved about. The big FEMA tent was carried to different locations by two men. Military vehicles and soldiers were moved and the crowd was filmed from different angles. In between the filming they brought us hot soup just to help keep us warm.

We then started the second scene. We, the town folks, are waiting at a table for our MREs when we are told they ran out of food. There is then a panic as people turn and run toward one of the army trucks hoping there is food. On three different occasions I was running alongside of Matt Damon. A woman falls down. I continue to run as Matt stops and helps her up. At that moment I know I will be on the big screen for a moment alongside Matt Damon. I imagine teaching a course on disaster mental health and showing the 20 second scene where I have my mask on and I am running next to Matt. I am so excited, then we break for lunch.

Lunch is served outside. There are long tables and we sit and eat pasta, chicken, beef, potatoes, vegetables and strawberry shortcake. It feels like a scene from Hollywood. I loved it but it was time to get back to work. 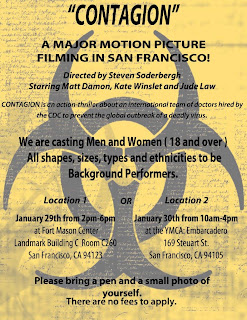 We continued filming the same scene over and over. By now tracks were laid for the camera cart, trucks were moved. More importantly for me, I was no longer part of the group that ran alongside Matt, I now walked way in the opposite direction. So, if you see s guy with no face but blue gloves walking away, that’s me!

There was a scene in which just Matt talked. At that time blue screens were put behind him. We all circled Matt and watched. I know when I watch “Contagion” I will see Matt talking in a chaotic crowd scene. I will no however that 600 of us quietly stood around watching him do his stuff!

I was impressed with Matt. He stayed outside with us the entire day. He did not have to. We all respected his space but we all liked having him around. The only way you could tell he was the star was that he drank coffee from a coffee shop and he was allowed to have his cell phone. Otherwise, he was outside struggling to keep his feet and hands warm all day just like the rest of us.

So that was it. 600 extras, military vehicles, helicopter fans, film crews, breakfast and lunch, and we all got paid. It took one day for set up, one day of filming and one day to tear the set down. All of this for one minute of film time. For me however, it was my touch with Hollywood. I kept my mask, I watch for when the trailer comes out. I smile whenever I think about the virus that attempts to wipe out humanity. And I thank Cathi for calling me in September to tell me about “Contagion.” Now that is the way to wrap up a sabbatical!
Posted by Unknown at 7:53 PM