Well, today we did our first full day of “regular work.” First it was Mass, and then we all met for prayer and worship. At 9 AM we met with Sil, the director of the Ministry Center. He introduced us to the issues and procedures related to men who hustle and live in the night community. Then we moved into high gear. 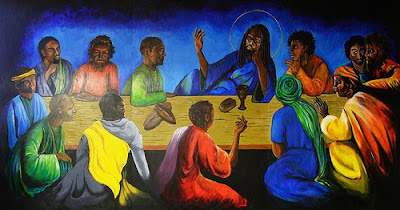 We cooked lunch, BBQ and BBQ chicken, hot (spicy) rice, and corn. Half of the team went upstairs to work in the office. Then the guys began to arrive.

It was the beginning of the month and so we only expected two or three guys. There were ten. So the guys, Emmaus staff and our team ate and prayed and talked and laughed together. It was a loud almost celebratory day.

Some of the team members participated in the art classes Emmaus offers the guys. Finally the day at Emmaus ended in prayer. It was a good first day.

Next we walked over to EZRA Multi-Service Center. This is a Jewish community Center that is funded by the Jewish Federation of Chicago. We were there for a tour of the JUF Uptown Café. This is the only kosher anti-hunger program in the city. What we got was a tour of the entire building. What a surprise.

The three story building is home to multiple services. There are job prep services, case management and language classes. The third floor is the senior citizen center for Russian Jewish immigrants. There are music classes, social rooms and Russian newspapers. What a place.

Monday, March 8th is International Women’s Day. The center is putting on a concert Thursday to celebrate this event. It will include professional musicians and opera singers from the former Soviet Union. We were invited, it is pretty exciting.

The center was created after a survey found that 15% of the homeless were Jewish, there was a need to address. The center was supposed to end homelessness in three years. That did not happen! However, this agency works with other agencies and does wonderful work. It was a good tour.

We then went back to the Ministry Center and made supper, Jan Patterson’s famous Tortellini and Spinach Soup. We had salad and bread, it was a wonderful time cooking and eating together.

The meal was followed by worship and reflection. It was clear we were all beginning to relax and enjoy one another and the guys. Finally we had some of the team members went out for coffee and others to go talk to the guys. It was another good day.
Posted by Unknown at 8:29 PM