Rome and the Year of Africa

Rome is focused this year on Africa. Africa is a continent of vast potential and resources, of varied cultures and peoples. However, sadly, it is also a continent of civil war, disease, poverty and human rights abuses. To be sure there are few areas of the world that do not suffer war, disease or brutal regimes. The nations of Europe and North America are involved in those wars. However, the focus on Africa is appropriate.

There are few places on the planet were Christianity is growing at such an impressive rate. There are few places on the planet where right next to Christian communities Muslim communities are growing at an equally impressive rate. These peoples, often fellow citizens have a choice to make. They can either learn to respect one another, value each others unique dignity or they can ignore the teachings of their faiths and attack one another. The stakes are high, for them and the world.

So this year Rome has focused on Africa, the mother of nations. In March the Pope visited Angola and Cameroon. Just this past September the bishops of Africa and Madagascar meet in Rome for their episcopal conference. Currently the bishops are attending the Synod of Africa in Rome. 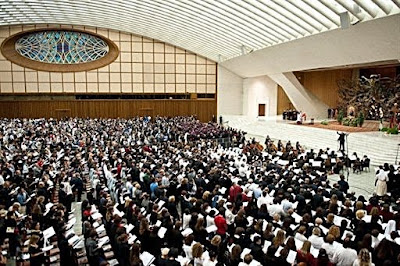 The suffering of the continent is great. The United Nations estimates that over 400 million Africans are living on less than a dollar a day. An additional 800 million people suffer from chronic hunger.

The Church is assessing what it can do to alleviate suffering and what it has failed to do. This includes an honest assessment by Church leadership about its silence prior to the Kenya election and resultant turmoil. The Church is also loudly calling out for reform and democracy. However, many of the bishops are calling for more basic changes. This includes valuing the traditional family. This includes a call for the end of oppression of women in the forms of prostitution, pornography and rape.

Additional threats to the well-being of Africans include the HIV/AIDS epidemic, armed conflicts, rampant corruption and multinational corporations exploiting natural resources. In the weeks ahead I will discuss the struggles Africans and the Church face if they are to find ways to grow, prosper and live in peace with their neighbors. However, I will also be talking about the celebration of faith that is the Catholic Church in Africa.


Kenyan Catholic Music
Posted by Unknown at 11:46 AM