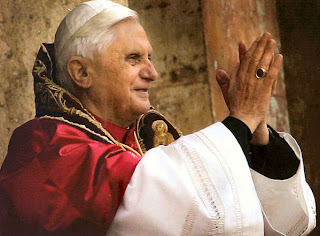 I find myself drawn to world-music. It is a term that is way too broad to be useful. In my case I simply mean music that is a fusion. I have preferences, I like music fused with African and Caribbean rhythms, I like folksy music and I especially like to be surprised. Well, a new addition is being added to the collection of world music at the end of November 2009.

Geffen Universal is releasing a new and interesting CD album. It is a collection of eight new songs. The collection is titled Music from the Vatican- Alma Mater. The most unlikely performer is Pope Benedict XVI. He will be heard singing and praying.

What makes this a type of world music or fusion? Everything. One composer, Simon Boswell (of Tin Man fame) is a British agnostic. Another, Stefano Mainetti, is an Italian Catholic. The third, known for North African folk music and world music is Nour Eddine. Mr. Eddine is a Moroccan Muslim. The composers wrote eight new songs that combine modern sacred music, prayers and Gregorian chanting. The music blends the sounds and rhythms of North Africa with the musical traditions of the West.

His Holiness Pope Benedict XVI can be heard singing and chanting in Italian, French, English, German, Portuguese and Latin. His Holiness is accompanied by the Choir of the Philharmonic Academy of Rome which was conducted by Monsignor Pablo Colino. The Monsignor is the Maestro Emeritus of St. Peter's Basilica. Additionally, the Royal Philharmonic Orchestra performs on each track and they were recorded at Abbey Road studios in London. Face it, this qualifies for world music!

The Vatican Alma Mater
Posted by Unknown at 11:43 AM

Additionally, these may leave residue in your machines that may prove hard to remove.

Do you want a simple and non-automatic coffee maker or does one want the fully programmable ones.
Before that, people mostly used a percolator in your
own home or within the office.