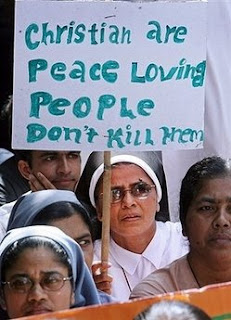 It is not enough that only Christians of Indian descent call on the U.S. government to pressure India. This is a human rights issue and as such should be responded to by all who care about protecting the dignity of all people. The strategy of the coalition is impressive. It includes the use of video clips, targeting all members of congress and utilizing an e-mail/technology campaign.

So, how bad is it getting for Christians in India? Well, first remember, these are not “colonialists”, the Indian Christian community is one of the oldest communities in the world. However, they are being attacked by Hindu extremists. The key word here is “extremist” and they should not be confused with the vast majority of Hindus. Extremist don’t care about specifics, such as Indian Christians are Indians and not European colonialists. Extremist see things in black and white and work through fear.

That fear has been very real in Indian. Reports coming out of India state that extremist are actually offering money, alcohol or food to those who would hurt Christians. It appears to be working. Dr Faiz Rahman, the chairman of Good News India states that “The going price to kill a pastor is $250.00”. Most of the newspapers state the problem is mostly localized to Orissa. However, it is a big problem.

In the past months there have been over 65 people killed, thousands of homes have been burnt to the ground. Hundreds, that is hundreds of places of worship have been destroyed. There are at least 11,000 refugees. For this type of destruction to continue the government must be looking the other way. So, that begs a question, how is America to respond?

The 2025 report to the President speaks of a world that is multi-polar. The two rising powers are China and India. We have mixed reactions to both countries. Americans are drawn to China because of its long history, the dynasties and its exoticness. We are also repulsed by the reported rigidity and violations of human rights.

Americans are drawn to India for some of the very same reasons. This is the land of the Indus Valley, the land of multiple world faiths, of art, science and spirituality. It is the largest democracy in the world. India could be a natural ally of the United States. So, why when the world is changing and national alliances and interests will be fluid would the Indian government not respond to these violations? Why would a nation famous for its diversity not clamp down on a group trying to establish a Hindu Nation at the expense of everyone else?

To be sure, not all of the news is bleak. In local elections there are increasing numbers of Christians running for office. This is good news. However, there are 23 million Christians in India. The majority of them are poor and are viewed as a threat. Our silence and apathy are not acceptable responses. To be consistent our actions must be in support of the human rights of not only Christians but of all minorities whose rights are being violated. We cannot remain silent.

This is good site to spent time on. allergy Read a useful article about tramadol tramadol

You wrote a very interesting article. And I agree with you. hair loss Read a useful article about tramadol tramadol