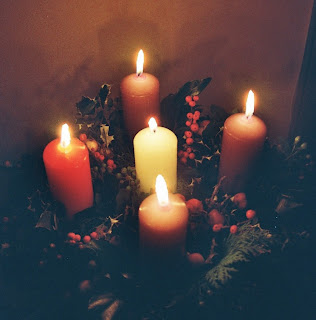 I went to church today thinking about India and what we as a species are capable of. Christians are being killed by Hindu extremists in India, Hindus are being killed by Muslim extremists in India, and in Iraq everybody seems to be killing everybody. Two weeks ago there were six armed robberies in Fort Wayne in one night. America, the defender of human rights tortures and is viewed as a killer of Muslims. I went to church sober and preoccupied.

When I got to church the colors had changed to purple. The bishop presided over Mass, it was the first Sunday of Advent and I had forgotten about it. Boy did I need it.

This is a time pf preparation. A time of prayer and meditation. A time to get ready for the coming of the Lord. Now is not the time to think about Santa or gifts or me, me, me. It is a time of quite, honest preparation for the humility and generosity of the Incarnation.

Next week our school will host a Living Nativity. We are Franciscan and follow the tradition of Francis at Greccio. Between now and then I got some praying to do, a candle to light, some thinking to do.

When I left church the world had changed. It had snowed and it was wet, heavy, quiet and white. I took my dog to Sweeney Park for a walk by the river and through the Japanese Gardens, the foot bridges and we ran, followed bunny trails and enjoyed the beauty of creation. Yep, there is more to the world than violence and pain and it world be wrong to ignore either.

Peace
Posted by Unknown at 1:25 PM