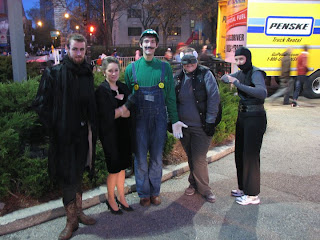 I had been looking forward to the Halloween Parade on Halsted Street since I arrived in Chicago. I was told it was an exciting, almost carnival like experience. Kaio was all set to attend. I did not dress up and I did not go with my community members. I wanted to get there in time to have a good spot for taking video. I would have enjoyed their company but I made the right decision. Once I saw guys in dresses wearing rolls of toilet paper in their hair I knew I would be busy with my camera.


Halloween on Halsted: Ladies of the House

The crowds were very friendly. There were parents and children. There were people with their pets and there were just folks in customs who were happy and wanted to talk. Lucky for me one of them was a Viking!

You name the theme or custom and it was there. There were parking ticket machines, condiments, and movie and TV characters. However, my favorites were the old standbys. I especially like the beautiful vampire. She was able to be attractive and frightening at the same time!


Halloween on Halsted: Vampire on the Corner

Once the parade started all eyes were on the street. I liked the marching bands, the spirit team and the floats. This was not a huge parade. It was not slick. Instead it was a very impressive neighborhood parade.

The parade was not overly decadent. It was not adult themed. There was an acknowledgment that this was a neighborhood parade and that children would be there. Any adult content occurred after the parade. Compared to other similar parades I would say it was pretty tame. To highlight the family nature of the parade at the beginning of the evening the parade started with a pet parade. Adults and children in custom proudly walked their dogs, who were often also in custom.


Halloween on Halsted: Pets on Parade

There were lots of creative customs. Still, the one that I really enjoyed, that channeled my inner 12-year-old boy, was Iron Man.

Little Shop of Horrors was the overriding theme for the parade this year. The float was pretty cool, even enjoyed the music.


Halloween on Halsted: "Feed Me" float

The Spirit Team had a lot of energy and they again demonstrated this energy during the “After Party.”

I like the Tree Man because he reminded me of myself!

Captain Jack Sparrow really got into character and knew how to interact with the crowd.


Halloween on Halsted: Egyptians in the Window

After the Parade families went home. Most of the participants in the parade along with the audience gathered for an after party. There was music, dancing and conversation. It felt like a scene from the Catina in Star Wars. This first clip is when the crowd is beginning to gather.


Halloween on Halsted: After Party

I like this scene because there are so many different characters. I also enjoy the dancing lady mouse, boy she has energy!


Halloween on Halsted: After Party II

The music and the stage acts kept changing. I of course liked the fire dancers and the music.


Halloween on Halsted: After Party III

It was a fun evening. It felt exotic but safe. People were friendly and engaging. I never felt imposed upon and I certainly knew I was not in Fort Wayne! It is a little late but Happy Halloween.
Posted by Unknown at 3:32 PM