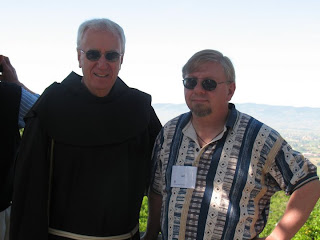 Francis of Assisi founded three religious orders. The First Order consisted of the Friar Minors, the brothers. Today the First Order consists of Friar Minors, Friars Minor Conventuals, and Friar Minors Capuchin. The Second Order consisted of women, the Poor Clares. The Orders grew quickly. People were drawn to the simple gospel-living message. You live humbly, you are a servant, you care for the poor, you take a vow of poverty, you recognize your connection to all of Creation and you work for peace and build bridges instead of tearing them down.

This new movement caught on quickly and soon married men and women tried to join. Francis did not want his movement to be a source of pain and conflict within the family. His solution was the creation of the Third Order. Originally the married men and women who joined were referred to as the Brothers and Sisters of Penance. They were given their own Order. The creation and founding of the Order was assisted by Bishop Ugolino who later became Pope Gregory IX. The Order became known as the Third Order.

Over the years that have been many changes and transformation for all of the Orders. Today the Third Order subdivided among the Seculars and the religious. Secular Franciscans make public professions of their faith, they do not make vows. Secular clergy are those clergy that are not members of the first two Orders but they do take vows and they seek to live a Franciscan life. Clergy who are not associated with the First Order, such as a diocesan priest, but who follow the charism of Francis can join the Third Order. Religious Third Order members also include the Third Order Regulars. Our very own Sisters of Saint Francis of Perpetual Adoration are members of the Third Order. They do take vows, they do live in community but unlike their sisters the Poor Clares, our sisters live and work in the world.
It may sound confusing but in fact this large Franciscan family is made up of people who follow the example of Francis and attempt to life “Gospel to life and life to Gospel.”

So, back to the Secular Franciscans. We have had a number of modifications of the Rule in the last 800 years. The first Rule was written in 1215. The first Rule or the “Primitive Rule” was approved by Pope Honorius III in 1221. The Rule was modified in 1289, 1883 and most recently by Pope Paul VI in 1978.
As Secular Franciscans we meet regularly with our local fraternity. We have a structured program of formation that consists of Orientation, Inquiry, Candidacy , and finally Final Profession. Meetings consist of on-going formation and study, communal prayer, service and fun. Issues that concern Secular Franciscans include environmental issues or being good stewards, social justice, peace-making, and helping and advocating for the poor and marginalized.

So, in short, the Secular Franciscans are members of a Catholic, Franciscan Order established by Francis of Assisi and recognized by the pope. Hope this was helpful.
Posted by Unknown at 9:10 AM