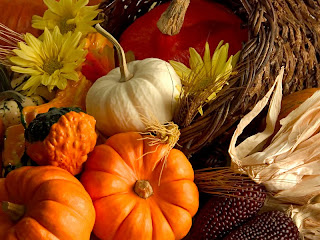 So it is that time of year again when I try to put into words what I am thankful for without being boring or maudlin. Neither is easy. Quite simply there are times it is difficult just to be thankful.

We live in a world of great injustices and violations. We live in a world of genocide, rape and murder. We live in a world where the powerful trample the weak. However, it has always been that way. So I am so grateful for all those who defend human rights, even as theirs are violated. I am thankful for Jimmy Carter and Dalai Lama but I am especially thankful for the gifts of Rigoberta Menchu, Aung San Suu Kyi, for Peace Bridges International, for workers of the International Red Cross and Red Crescent Societies that are increasingly targets of violence. I am thankful for all of the unnamed defenders of democracy, civil rights and peace in so many troubled areas of the world.

We live in a world in which creation is violated and life as we know it on this planet is threatened. So I am so grateful for all of the Davids who never acknowledge that they are not supposed to have a chance against all of the Goliaths of the world. I am grateful for Restoring Eden, for Franciscan Action Network, to Pope Benedict XVI and the Ecumenical Patriarch Bartholomew as well as secular and other faith initiatives that work to heal a hurting planet.

I am thankful for groups and individuals that have touched me on a personal level. I am especially grateful for Emmaus Ministries and the Kaio Community. For 20 years they have tirelessly served the “lepers” of the streets of Chicago. They have worked with homeless men who participate in prostitution. These servants have worked outreach from 10 PM until 3:30 AM six nights a week. They have staffed a Ministry Center (read hospitality center) six days a week. They work with the incarcerated, the mentally ill, families and the sick. I am even more grateful to the men we serve. They have shown me that a service without love is hollow and that we are all the reflection and creation of a loving God. They have taught me in a way I never knew before that we truly are all brothers and sisters.

Since I have lived in Uptown there has been a minimum of 12 shootings with three deaths and numerous injuries, one attempted rape, and an assault on a woman (in front of me.) all of this was within four blocks of our residence. I have walked around the blood stained sidewalks. I have been with folks who have seen and heard too much. All of my exposure has been superficial and yet enough to demand my attention. There was an attempted bombing of a concert, a synagogue I attended was a target of terrorist in Yemen and our block had the bomb squad called three times. So, I am so thankful that the majority of people here are folks who get along with one another. I am grateful for the folks who respect one another and are friendly. In this year of violence I have felt safe, I am grateful for the meek and especially for the peacemakers.

I am grateful to the University of Saint Francis that granted my sabbatical. I am thankful for their continued commitment to service to others, to peacemaking and sharing the Franciscan spiritual and intellectual traditions. I am thankful for my Alma mater, the Adler School of Professional Psychology. I am so proud of their continued and growing commitment to social responsibility. This is a commitment that is local as well as national and global.

In Fort Wayne I am Thankful for the Fort Wayne Rescue Mission, the Ava Maria House, Matthew 25, St. Mary’s Soup Kitchen and the Dioceses of Fort Wayne-South Bend. I am thankful for all of the food pantries, the resale shops and the volunteers who work to help the poor and hungry.

I am thankful for a loving family and I am particularly thankful for Cathi who shares me with others. The past four months would not be possible without the knowledge that Cathi truly want us to be in the world making an impact. It is a miracle and a gift that as I was far from her I never felt closer.

This has been a difficult year for so many people. I pray you find more than enough reasons to give thanks as you gather with your loved ones. Happy Thanksgiving.
Posted by Unknown at 8:43 AM