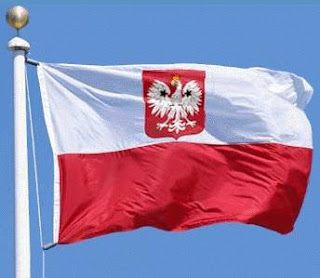 After Chinatown I took the “L” and bus to Ukrainian Village. I wanted to stop and see two Polish churches but I was sure I did not have enough time. Then I saw two bell towers a block from the bus window and realized I was passing the Polish churches. I got off and walked toward Holy Trinity Catholic Church. The church was a combination Renaissance and Baroque style of architecture. Between the two bell towers stands a statue of Our Lady of Immigrants. The church opens up with two large “millennium” doors.

The area was full of cars. As I walked up the stairs I heard people talking, in Polish. It was a high school graduation. I arrive right after it was over. The sanctuary was full of people.

What a sanctuary. It was cavernous and bright. The inside dimensions is 125 feet by 200 feet. There are large, bright murals of biblical scenes and important people to the Polish community. There were shrine on both sides of the sanctuary. The shrines were so big that they had stairs going up to them from two sides.

I walked around taking photos. I tried to talk with people but the language barrier was substantial. The children spoke English but they were busy with each other.

After spending time in the church I walked in the other direction to another bell tower. I walked to St. Stanislaus Kostka Parish Church. This is a church with a proud history. It was the mother church of Polish immigrants. At one time it had 40,000 members and 12 Masses on Sunday. Today it has a smaller congregation and a significant Hispanic membership. Only a few blocks from the other church and now the language spoken is Spanish!

The church was modeled after a church in Krakow. It originally had two towers but one collapsed. The church has a baroque altar with choir stalls next to the alter. There is a painting of Mary handing baby Jesus to Stanislasaus Kostka. The sanctuary dome has a painting of Christ in heaven. The chandeliers that hang over the pews are Tiffany chandeliers. The stain glass windows address the mysteries of the rosary.The church now has the largest Monstrance in the world!

I was not able to spend much time in this church. There was a baptism taking place so I spent much of my time outside talking to a member of the church. It was not clear if he was a deacon, ground keeper or active member. What was clear is that everyone knew him and respected him. He told me about the history of the church. He pointed out that the house a few feet away belong to Dan Rostenkowski. He talked about his pilgrimage to the Holy Land and to Rome. This was a spirit filled man. He was simply a joy to spend time with.

Finally it was time to move on to Ukrainian Village.
Posted by Unknown at 7:49 PM