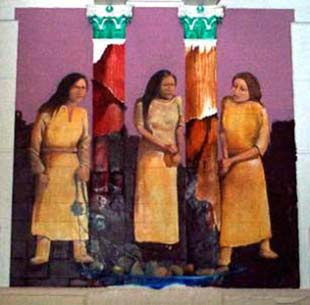 I went to Mass at Our Lady of Lourdes church. This is a huge church with three domes. It is famous because while it is now on the West side of Ashland Ave. that was not always the case. It had been on the east side. When Ashland was widened the church was cut in half and moved across the street! Pretty cool engineering feat.

The church is in need of some work. Still, its beauty is clear. The domes, ceiling, icons and statues are beautiful and reverential. The congregation consisted mainly of Asians and Latinos. Afterwards I walked back to the gardens to the Adoration Chapel. In the garden was a statue of Mary and a man was holding her hands as he prayed.

After church I walked over to the American Indian Center. It is in a large building. I was given a tour. There is an auditorium, museum cases with artifacts and headdresses, murals and literature. I also was told about their many programs for families, children, elderly, mentally ill and the community,. There is counseling, educational programs, wellness programs and of course cultural programs, art galleries and powwows. This is the largest urban Indian community center in the nation. I referred folks to it when I lived in Chicago. 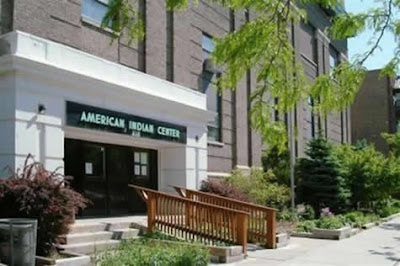 Next I simply looked at some interesting sites from the sidewalk. That included the Queen Ann Style home of Wallace Abbott, founder of Abbott Pharmaceuticals. The house and gardens were beautiful. I then went past a huge Buddhist Temples with a two story tall Buddha. I would love to go inside if I have time.

Finally I went past the St. John Assyrian Catholic church of the East. This was a significant find for me. I remember reading about this church. After September 11th someone started a fire in this church thinking they were striking back at Islamic Extremists when in fact they were attacking one of the oldest Christian groups in the world.

I then went home to prepare for a very busy day!
Posted by Unknown at 9:26 AM