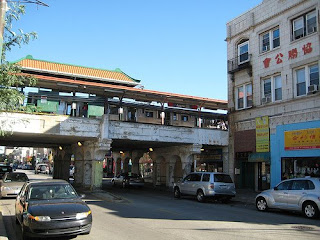 I worked outreach my second evening here. I was in BoysTown from 10AM till 3PM. Our guys recognize us and walk up to us and start talking about housing, health, friends who were beat-up, friends who have died, really serious stuff. If they are using drugs they avoid us, I guess we seem parental. Our focus really is on prostitution and not homosexuality and most of our guys see themselves as straight.

The most disturbing part of the evening for me was seeing a group of homeless teenagers. They know the Emmaus folks and approach us. They live on the streets. They looked exhausted. I was impressed with how they attempted to take care of each other. I was saddened by how hard their lives are.

I am loving the diversity here. I hear African languages, Chinese, Vietnamese and Thai, and I hear Jamaican accents. The people here dress in so many varied styles. I have been to three different churches, a Lebanese restaurant, one from Ghana and I was in "Little Vietnam".

Last night I went to a lecture by the Prior of the Holy Cross Abbey. It was at the University of Chicago so it felt like I was in Oxford. The Prior, Father Paul Funk spoke on “Evagrius of Pontus: From Cosmopolite to Desert Monk.” The talk was great, the food, Thai, was equally good. I guess you could say I was being feed spiritually and physically!

I met this couple that offers free retreats for poor folks. The guy has walked all over the nation. He had a degree in engineering. He joined the Navy and then struggled with being part of the military and being a follower of Jesus. So he left, he went AWOL. He visited abbeys in England and then turned himself into the Navy and received a less than honorable discharge. He then began seven years of walking and talking about Jesus. He reminds me so much of Francis.

Well, that is my update for day two. I worked with the guys, spent time with my community members and got to know the neighborhood. It is a good beginning.
Posted by Unknown at 4:50 PM