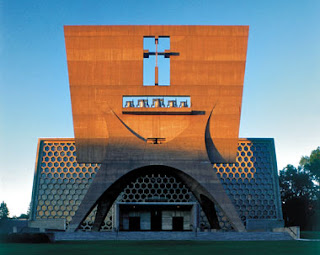 We had a slower start this morning. People could sleep in, a little. Breakfast was at 7:30 but our first group event was not until 10:30. That “event” was Mass with the Monks.

The Abbey Church of Saint John’s is something else. It was designed by Hungarian architect Marcel Breuer. The church is the central building on campus and can be seen before entering the campus. In a sea of trees, lakes and traditional campus buildings rises this concrete and modernistic structure. The outside consists of a free standing and massive “bell banner”. This connects to a sloping church. Inside the church is cavernous. The sanctuary has the seats for the monks and victors as well as the throne. The crucifix faces the monks or the general audience as the service demands. This is a stark church built of concrete. However, the wall facing the alter looks like a concrete bee hive. However, each cell of the bee hive is filled with vibrant stain glass. The seats are heavy, straight and without any padding, for the seats or kneelers. This is a powerful edifice. It demands one focus on God. It also lacks any hint of the feminine and I look forward to visiting St. Benedicts!

The church has a number of chapels on the lower level. I love these smaller spaces. I also look forward to visiting the Saint Peregrine the Martyr chapel. St. Peregrine Emperor Commodus, in 192 (this is the Emperor from the movie Gladiator) declared a day in which he would be honored as a demigod. Peregrine, a young boy at the time, along with three teenagers spoke out publicly about this. A senator was converted by their testimony. He was then killed and the emperor wanted to know where his wealth had gone. The four boys were then tortured. And they were tortured, whips, fire to their burning bodies and yet they remained silent.

The young men being burned had a vision of an angle whipping away the flames and the boys sang about this vision while being tortured. The result was one of the torturers left to be baptized. The emperor finally had them flogged to death with leaden scourges. Their bodies were recovered and became relics, objects of adoration and inspiration.

The body of St. Peregrine was enshrined in a number of different locations over the centuries. He was moved to Saint John’s University in 1927. While I am not a fan of relics and do not feel comfortable around the remains of the dead I do look forward to spending time with this martyr.

The mass was moving. The procession was special. All of these monks processed to the alter in twos. They bowed before the alter and then faced one another and bowed to each other and then stepped backwards before going to their seats. This deep respect for one another moved everyone I talked to.

The rest of the day was productive as well. After a good lunch we began our Small Groups. During the first session we watched a DVDE which was a lecture by Re. Michael Himes on “Finding God in All Things”. It talked about the sacramental way of life that marks Catholicism. After break we then discussed our readings. This was powerful because we addressed the many pressure faculty face at Catholic Universities. Issues of the role of women in the church, the churches stance on homosexuality and the use of power permeated the discussion. Our group is intelligent, articulate, and respectful and I love us!

We had our Prayer/Spirituality meeting at Emmaus Hall Chapel. I love all of the different spaces this campus has. The focus was on introducing us to Contemplative/Centering Prayer.

After dinner we heard two talks by our mentors. It was about their faith journeys. There were no rose colored lenses used here! Life is heard and God is good. So in both talks, which were very different, there was a sense that life has suffering and life has more. They were very well received.

Finally we ended the evening with a social. It was another good day.
Posted by Unknown at 4:35 AM