Book Launching of “Streetwalking with Jesus” 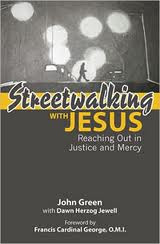 Joshua Kent’s art installation Saturday evening was wonderful. Sunday morning I was looking forward to going to church with Nik Burkhart, however, that was not to be. I did so many chores in the early morning I ran out of time. Besides, I had papers to grade. At 2pm I caught up with Paul and Aubrey Goodell at the Emmaus Ministries offices and we were off the burbs for the book launching party.

John Green had been writing ‘Street Walking with Jesus” for a long, long time. I think Origen helped John with the first draft! So this was a big deal. The forward was written by Francis Cardinal George who has been a consistent and important supporter of Emmaus and the guys. I was looking forward to the event. Besides, I wanted John to autograph my copy.

We arrived early to help with the set up. Paul worked the inside and Aubrey and I posted the signs all over the place outside. Paul was not his to-the-point concise self. Instead he began to give us long drawn-out instructions on how to hang the posters. I turned to Aubrey and said not to worry, once we were outside he wouldn’t know where we hung them. Aubrey liked that approach and we got to work. Working with Aubrey was one of the best parts of the day. She is funny, animated, and very interesting.

Afterward we came inside. The room was huge, a school gymnasium. There were refreshments, art, music and people. Oh there were people. There were volunteers and board members, members from Uptown Baptist Church and friends and supporters of Emmaus Ministries. Before the launching formally started the Emmaus video was shown. Johnathan Hancock, the Executive Director of Emmaus is a great guy. He is supportive of the guys and staff and he is a man of faith. Still, seeing him on the big screen, I was impressed with how big his head was!


Book Signing for "Streetwalking with Jesus"

I liked the poster/exhibit for E.M. While I am not a fan of the use of the word “prostitute” because I feel it labels a person and ignores everything else about them, I still liked the poster exhibit. I liked it because it asks the reader to look at themselves. It asks them to consider who Jesus and the early Christians associated with. It asks the reader to consider who they are to walk with and how are they to treat others.


Booking Signing for "Streetwalking with Jesus"; Would YOU be a…

The book launching began with a blessing and comments by Francis Cardinal George. His commitment to Emmaus Ministers and his affection for the Greens was evident. While he is one of the busiest people in the Midwest he still stayed for the entire event. I was pleased to have a few moments of time with the cardinal.

John Green then spoke. This was his day. The book is really a history and a reflection. It guides the reader as they figure out what their ministry is. John is such an admirable guy. When I think of all the guys, volunteers, interns, students and staff that were touched by the work of John and Caroline I am humbled. He is the reason I cannot simply say ‘someone should do something.” It is clear we are that someone, one person can make a difference.


John Green Telling a Story and then Reading a Story


The launching was an inclusive experience. We got to hear about the stories and illustrations in the book. At the tables volunteers were all sharing their favorite Emmaus Ministries stories. Most importantly, we were all buying copies of the book!


Book Signing for "Streetwalking with Jesus" : Stories Told with Words and with Pictures

Finally, after all of the talks and video clips people went to the table to have John and the Cardinal sign their books. While that was happening we enjoyed a short concert by GreenChoby. GreenChoby is a folksy group composed of Caroline Green (john’s wife) and Mike Choby.

So that was my extra special visit to Chicago. Business, friends, art and a book launching. Not too shabby! My prayer is that John’s book helps Emmaus Ministries grow in the number of supporters and volunteers it has. I pray that it helps people discover what they are being called to do. In the meantime, I just spent the weekend with artists, authors, musicians and friends!
Posted by Unknown at 8:36 AM