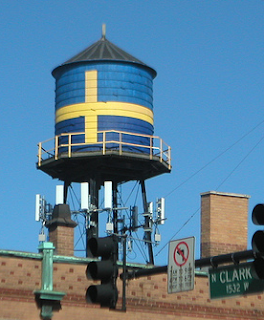 During my last week at Emmaus I was tired and really ready to go home. During the previous couple of weeks I had spent a 10 hour day being in extra on a movie set. I attended a fantastic Christmas party. I finished teaching at Adler. I was saying good bye to the guys, finishing my work at the Ministry Center and with outreach.

So I was more than ready to go home. I missed Cathi and I missed Kerri, my colleagues and the Fort. Still, I kept feeling like I should have one more adventure, see one more sight. The problem was I had no energy so it looked like I was not going to doing anything special with my last week in Chicago. Thanks to Laura Eppler I was wrong.

I was walking around the offices on Tuesday when Laura looked up and simply asked if I would want to join her and Joel after work and go to Andersonville to watch the Santa Lucia Day Parade. Laura’s voice was like music. I love Andersonville, a neighborhood that I often walked to. I loved it’s Swedish history and traditions. I loved all of its varied ethnic foods, its yuppy bars and I loved watching Muslims, Assyrians, LGBT folks and hipsters all share the same neighborhood. Most of all, as a good Norwegian-American who had been to Italy I loved the idea of a holiday that is celebrated in all of Scandinavia but honors the patron saint of Sicily.
This was great. I didn’t have to walk there, I didn’t have to drive. I didn’t even have to think, all I had to do was show up at Joel’s car. I said I was tired! Best of all Emily my adventure partner was joining us.

So we arrived shortly after our staff meeting. We all met at the Swedish Museum. The young girls came out with their white dresses and candles in their hair. Actually for the outdoor portion they had candles with light bulbs, a good, safe choice! I have seen huge, elaborate parades in Chicago. This was not one of them. This was a small, village parade. It consisted of girls walking down the street sings and neighbors following. It was simple and beautiful.

While the evening was just beginning it was winter and already dark. There was enough snow on the ground and chill in the air to imagine the parade taking place in Sweden, or, better yet, Norway.

It was a simple parade. We walked two blocks south on Clark Street, crossed the street and then walked north. Midway the girls stopped and sang “Silent Night.” They then proceeded to Foster Avenue, crossed the street and head back south to the museums. The parade was simple but for me very moving. It reminded me of my father and of Norwegian parades in Humboldt Park. It reminded me of foods, aromas, Yogi Yorgessen , and straw ornaments. I had always wanted to attend this parade and now thanks to Laura, here I was.

After the parade we all went inside the Swedish Museum. This is a fine small museum that spans the Swedish immigrant experience. It has the clean straight wooden lines and white walls that remind me of my family’s homes in Norway. As we waited for the concert to begin I spotted the most content child I had seen in a long time. Clearly this child could be a poster child for Christmas gatherings!

The main room was dark and then all of the Lucias walked in singing. Te official Lucia had a wreath of lit candles in her hair. It was magical. I felt like I was meant to be exactly where I was at.

The girls sang and I gawked at the room. People walked up stairs to the second floor of the museum. Cider and gingerbread was being placed on the table for us. This was a major Swedish signing group. Having spent time at the Norwegian memorial church I appreciated how important choral societies were. However, tonight was special. This was their last concert. There would be other Santa Lucia Day Parades and celebrations but this group would cases to exist. I was glad I got to hear them.

When the concert was over the young children gathered for an informal concert of their own. There parents supported them and it was a a special moment.

After the concert, the tour and our cookies it was time to call it a night. My time in Chicago was running out. However, I no longer felt guilty for wasting time. I had one last experience, one last adventure and it was a good one. I was ready to begin to pack up my clothes, artifacts and notes. Thanks to a wonderful evening in Andersonville I was now ready to go home. Thank you Laura and Joel.
Posted by Unknown at 1:10 PM