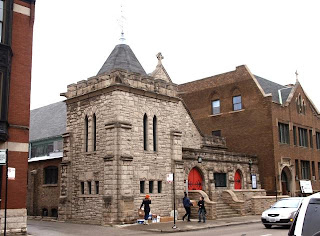 World AIDS Day is an important day for anyone who does outreach, works with the homeless, youth or works with folks who participate in survival sex. So when I was on sabbatical I made plans to attend a city-wide, ecumenical service at St. Joseph Parish Catholic Church. I was also looking forward to seeing one more magnificent church. St. Joe’s is the 2nd oldest church in the city. I was looking forward to commemorating this important day and be a religious tourist all at the same time. Well, that was not to be.

Turns out one of our guys was to be a key speaker at a World Aids Day service at St. Peter’s Episcopal Church. I had always wanted to visit that church. We all referred to it as the “Red Door Church’ for obvious reasons. Well, the wait was worthwhile. It was truly a magnificent church. However, first we had to calm the nerves of our special speaker!

The speaker came to talk to me the morning of the service. His navigator or assigned Emmaus Ministry Center staff was not available, she was home sick. The speaker, we will call him “Martin" was a nervous wreck. He had never spoke before an audience before, much less such a large audience. He was afraid that he would be judged or worse, not interesting. As he had a cathartic moment I apologized that Lennette, his navigator was not here. Well, he gave me a reality test. He point out that E.M. was a ministry and therefore I was an urban minister. If that is true he asked, than why did I not have faith that God meant for Lennette to be home today and that I was supposed to be available to him? That made perfect sense. He was falling apart I was responding be being a dispassionate, stoic Norwegian. Instead of joining his emotional stew I remained calm and we problem-solved. Lennette is great at nurturing, letting people know how much she cares. I was good at being an analytical problem-solver. He pulled “Martin” together, gave him a game plan and sent him on his way.

That evening the Kaio community arrived for the World AIDS Day Service at St. Peter’s Episcopal Church. The church was beautiful. The service was unique. I had never heard of speech choirs. The service consisted of an oratorical service with liturgy in which we all participated. It moved us from fear, to despair to hope. It was wonderful. The service was entitled, The Number of our Days: an Oratorio for Speech Choir. In the middle of the service Martin spoke. He shared his story of fear and despair and than of finding himself and a caring community. It was a unifying speech and many people were clearly moved.

The service was also co-sponsored by Bonaventure House. Bonaventure House is an Alexian program for people living with HIV. It is a program that is providing vital service to the Lakeview area of Chicago.

The program was wonderful. Afterward the Kaio community joined the rest of the congregation for drinks and conversation in the study. It was a great way of re-energizing our batteries to continue working with folks living with HIV. I am glad I finally walked inside the “Church with the Red Doors”!
Posted by Unknown at 7:03 AM