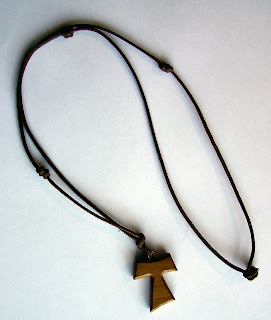 During our reflection members of USF announced the winner of our Tau Award. We started this last year. The Tau is one of two crosses associated with St. Francis of Assisi. This cross served as his personal signature. It is a primitive cross associated with the early Church, it is the cross worn by Franciscans today.

We had one criterion, to give a Tau to the worker who most exemplified being a Servant mentor.

Luckily I had one more Tau. This one came from our mother house in Mishawaka Indiana. The St. Francis Sisters of Perpetual Adoration are responsible for founding 13 hospitals and the University of Saint Francis. This cross was blessed by Father John Stecher of USF.
So, we were honor to present the Tau from Assisi to Don Miller and the Tau from Indiana to Jerry Paulding. These are compassionate, faith filled men who spend their time working and teaching young people to be servants. Francis would approved and so did the crowd.
Posted by Unknown at 7:36 PM